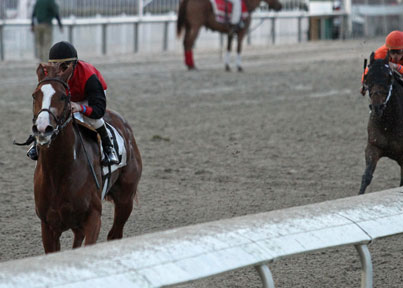 Even though there is no live racing in Alabama, horses bred in that state got their chance to shine on Friday at Fair Grounds in the $25,000 Kudzu Juvenile Stakes and $50,000 Magic City Classic Stakes.

In the Kudzu Juvenile, Ira and jockey Forest Boyce prevailed by a head to win with a 5 ½ furlong clocking of 1:07.21. Trained by Randy Nunley and owned by Jerry Hackett, Ira came into the race off a third-place effort at Parx Racing and a second-place finish at Laurel Park against maiden company. The gelded son of the Silver Deputy stallion J Be K, who was bred by Hackett Brothers Thoroughbred Inc., improved his record to 6-1-1-1 with earnings of $22,025.

A Bandit Walking, a Time Bandit gelding bred by Chase Ladner and owned by Pamela Pavolini who shipped in from Delta Downs, finished a game second with Abel Lezcano up for trainer Dale White Sr.

In the Magic City Classic, Dennis Murphy’s homebred Buggin Out drew clear to an easy 7 ¼-length victory as the 4-5 favorite. James Graham piloted the 3-year-old gelding by Indy for trainer Kenneth Hargrave. Buggin Out covered a mile and 70 yards in 1:43.61.

After finishing fourth in his debut at Louisiana Downs in June, Buggin Out has hit the board in six consecutive races, with the first five coming against maiden special weights and culminating with a victory at Delta Downs in October. His earnings now stand at $57,960 with a record of 7-2-2-2.

Busted Account, the winner of the 2013 Magic City Classic, finished a clear second with Miguel Mena in the saddle for conditioner Jonas Gibson. The Royal Empire gelding, who was bred by Bobby Pruitt and is owned by Michael Annechino, is approaching the six-figure mark in earnings with a bankroll of $99,165.