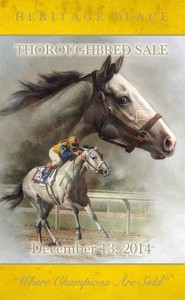 The third annual Heritage Place Thoroughbred Sale on December 13 in Oklahoma City posted the highest gross and average in the short history of the auction. All told, 88 horses sold from 121 who entered the ring with gross sales of $232,550. That represents an increase of 18 percent from last year’s nearly identical offering when 94 sold from 129 offered. This year’s average of $2,643 was a jump of 26 percent from last year.

The sale-topper was a 2-year-old Oklahoma-bred named Sly Okie, who sold for $20,000 to Ed Melzer from consignor and breeder Richter Family Trust. The Slewship filly has raced five times with two seconds and a third against maiden company and a fourth and a fifth in stakes company.

Two head sold for $13,500 as the second-highest price at the sale, and both were purchased by Al Ulwelling. First up was a yearling colt by Toccet consigned by Ellen Caines, agent for Hidden Springs Ranch LLC. The Oklahoma-bred is a half sister to Oklahoma Stallion Stakes winner Dancing Diva (by Affirmatif).

The second horse for that price was a yearling Mr. Nightlinger colt consigned by Mighty Acres, agent. The February foal is out of a stakes-placed mare whose first foal, Misterbulltoyou, has hit the board in all five career starts.

The highest priced broodmare was Flying Drum, who sold for $10,000 to Scattered Acres LLC from Ellen Caines, agent. The winning daughter of Forestry sold in foal to Stephen Got Even with a paid 2015 season to Affirmatif.

For complete results, go to www.heritageplace.com.