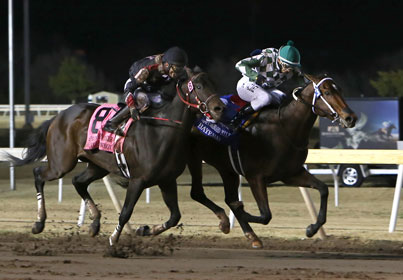 Billed as the rubber match between the top 2-year-olds this season at Remington Park, the $255,000 Springboard Mile did not disappoint on Sunday. Bayerd battled for the lead off the final turn, putting away High Noon Rider and then having to hold off the rally of rival Shotgun Kowboy, winning by a head in a thriller.

Owned by Clark Brewster of Tulsa, Okla. and trained by Steve Asmussen, Bayerd was put into position for success by jockey Ramon Vazquez in the final turn. Nearing the top of the stretch, Bayerd moved for the front, alongside pace-setter Supermason who handled a quarter-mile in :23.22; a half-mile in :46.09 and then three-quarters of a mile in 1:11.54.

As Bayerd attempted to take the lead, High Noon Rider moved to his outside and appeared ready to take over. Bayerd had something left and hooked up with High Noon Rider, nose-to-nose through mid-stretch.

Bayerd finally put High Noon Rider away and was up by nearly two lengths with a sixteenth of a mile to go when Shotgun Kowboy roared after him. Gaining with every stride, Shotgun Kowboy had rallied from last in the early going after a slow start but ran out of real estate. Bayerd held on to cross the line in 1:37.26 over a muddy and sealed main track.

High Noon Rider held on for third, 4-1/2 lengths behind the runner-up. Phenomenal Phoenix was along for fourth, six lengths from the winner.

“It was one of the most thrilling races, especially for a big feature, that I’ve ever seen here,” Clark Brewster said. A longtime supporter of Remington Park racing, Brewster had targeted the Springboard Mile when he purchased Bayerd for $75,000 late in the spring.

“We’re so proud of him, he ran a really tough race. We didn’t know if he could get the distance but really felt he deserved the chance after the Clever Trevor Stakes when he never really saw Shotgun Kowboy coming after him until he blew past.”

As for future plans with Bayerd, Brewster will leave that to Asmussen and the horse. “There will be lots of options for him. We’ll let him tell us where he wants to be.”

Bred in Kentucky by Alpha Delta Stables, Bayerd is a 2-year-old colt by Speightstown from the Cherokee Run mare Cherokee Jewel. The Springboard is his third career win from five attempts to go with one second-place run and a third-place finish, having never finished worse than third. The Springboard winner’s check of $150,000 moves the career earnings for Bayerd to $282,100.

$100,000 Trapeze Stakes
The Springboard Mile undercard at Remington Park Sunday was led by the companion race for 2-year-old fillies, the Trapeze, also at one mile. Trainer Bret Calhoun enjoyed the outcome as a pair of his 2-year-old fillies finished one-two with Zooming on top and Perfect Fit second.

Perfect Fit set the pace with a quarter-mile in :23.75, a half-mile in :47.28 and three-quarters of a mile in 1:11.82. She then gave up the advantage to her stable mate in the stretch as Zooming moved by to win by one length in 1:38.22 after sitting second behind Perfect Fit until the stretch.

Sweet Opportunity was third, 2-1/4 lengths behind the runner-up. Lovely Maria, the 2-1 wagering favorite, was fourth.

“She was breathing fire in the post parade and I thought we had a really good shot today,” Wade said. “She proved herself.”

The Trapeze Stakes is the third consecutive win for Zooming, all this season at Remington Park, in her four starts here. Bred in Texas by Charles and David Yochum, Zooming is a filly by After Market from the Bertrando mare Dance Studio. She made $60,000 for her Trapeze score to move her overall money to $94,630.

Jockey Cliff Berry picked up the winning mount for trainer Karl Broberg when jockey Ricardo Santana Jr. did not travel to Oklahoma City to fulfill his riding assignments on the closing day card due to a family emergency. Honey’s Ryan was chased throughout by runner-up Diva’s Diamond over the muddy track, winning by 1 3/4 lengths.

Owned by the Shawnee, Okla. partnership of Rusty Taylor, Elaine Holiday, Margaret David, Jerry Davis and Mike Walker, Honey’s Ryan was 5-1 in the wagering and paid $12.40 to win, $8.40 to place and $5.40 to show. Diva’s Diamond paid $7.20 to place and $4.80 to show. Blue Violet finished third and paid $5.00 to show. Flashy American, the even-money favorite had run in nine graded stakes races in her previous 12 races, but failed to threatened and finished ninth.

Honey’s Ryan was bred in Kentucky by the University of Kentucky and is a filly by Student Council from the Orientate mare Run Carrie Run. She won her fifth career race from eight attempts while picking up $60,000 to run her overall bankroll to $146,405.

$50,000 Jim Thorpe Stakes
Oklahoma-bred 3-year-old colts and geldings competed in the one-mile Jim Thorpe Stakes with Ibaka made the heavy 1-2 odds favorite by the betting public. The support, and rival competition, proved too much as Ibaka battled for the lead then faded in the stretch, passed by the winning Fesstune.

Owned by Clark Brewster of Tulsa, Okla. and trained by Scott Young, Fesstune was ridden by Belen Quinonez. The gelding won his first Remington Park race in four attempts this season, saving his best effort for his final attempt while scoring by three-quarters of a length in 1:37.44.

Big Money Speaks was the runner-up while Lingerlonger rallied for third. Ibaka finished a tiring fourth.

The show payoffs were abnormally large as the show wagering pool of roughly $67,000 contained about $60,000 on Ibaka. When Ibaka didn’t run at least third, the money wagered on him went to winning show tickets, forcing the larger payoffs.

Fesstune earned $30,000 to move his career total to $96,013. Bred in Oklahoma by Brewster, Fesstune is by Omega Code from the Festin (Arg) mare Fess.

$50,000 Useeit Stakes
Oklahoma-bred 3-year-old fillies battled over one mile in the companion race to the Jim Thorpe, the Useeit Stakes. Big closer Okie Smokey worked her magic again, rallying from last in the field of nine to grab the lead in the final sixteenth of a mile then draw clear to win by 2-1/4 lengths.

Owned by The Richter Family Trust (Kris and John Richter) of Perkins, Okla., Okie Smokey is trained by Carlos “Charley” Padilla and was ridden by Bryan McNeil. The Useeit score is her second straight stakes win of the season, following her triumph in the Oklahoma Classics Distaff in October.

Okie Smokey handled a mile over a fast track in 1:38.19. Heykittykittykitty was second with Cheyenne Blues rallying for third.

The win is the fourth from 10 starts for Okie Smokey, bred in Oklahoma by the Richter Family Trust. She is by Cavvy from the Silver Ghost mare Spooky Okie. The Useeit check of $30,000 moves the career money for Okie Smokey to $205,909.

The Useeit is named after the broodmare who produced 1924 Kentucky Derby winner Black Gold, who was owned by Al and Rosa Hoots of Oklahoma.