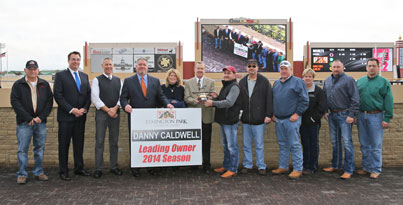 The 2014 Thoroughbred Season came to a close Sunday at Remington Park. The results at the top of the various horsemen standings resembled the way things finished a year ago as the top owner, trainer and jockey were all repeat champions.

Danny Caldwell – Ricks Award for Leading Owner
The Poteau, Okla. owner won his sixth leading owner title at Remington Park and his fifth consecutive. Caldwell runners won 39 races during the season to set a new record for success. The mark toppled the former standard of 36 wins set by Gary Owens of Mustang, Okla. in 2005.

Caldwell horses are trained primarily by Federico Villafranco and were ridden almost exclusively during the entire season by Ramon Vazquez. His horses competed in all levels throughout the season, making 177 starts.

Clark Brewster of Tulsa, Okla. was second in wins with 20. C.R. Trout of Edmond, Okla. finished in a tie for third place in victories with End Zone Athletics of Mansfield, Texas, both had 16 wins.

The Ran Ricks, Jr. Memorial Award is named in honor of the first owner with a horse on the grounds at Remington Park upon the opening in 1988. Ricks was an influential breeder and owner in Oklahoma and was instrumental in helping bring pari-mutuel racing to the state in the early 1980s.

Federico Villafranco was second in victories 38 while Karl Broberg and J.R. Caldwell finished in a tie for third place with 37 wins.

Asmussen was also the leading trainer by total stable earnings with $1,046,316. He was the only trainer to surpass the million-dollar mark for the season.

Ramon Vazquez – Steinberg Award for Leading Jockey
Riding primarily for leading owner Danny Caldwell throughout the season and for leading trainer Steve Asmussen during the first half of the season, Vazquez piled up the victories to finish with 90. This is the second consecutive Pat Steinberg Memorial Award for Vazquez, 29, in as many full seasons at Remington Park.

The Steinberg Award is named in honor of the late rider who dominated the early years of Remington Park racing before his passing in 1993.

Cliff Berry was second by riding wins with 79 while Jareth Loveberry enjoyed a tremendous first season in Oklahoma City with 68 wins.