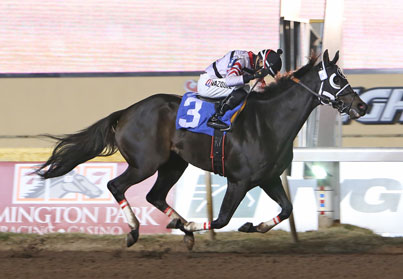 Remington Park leading owner Danny Caldwell entered Friday night’s races with 36 wins, tied for the record for most wins by an owner in one Thoroughbred Season in Oklahoma City. He won three races Friday to emphatically take control of the mark.

Corporate Charlie crossed the finish first in the third race of the night to give Caldwell the record with 37 wins. The Poteau, Okla. owner then won his 38th and 39th races of the season as Save The Gold won race four and Bear O won the sixth. All three of the Caldwell winners Friday are trained by Federico Villafranco and were ridden by the season’s leading jockey, Ramon Vazquez.

“I want to thank Freddie (Villafranco) and his crew and all of our friends that support me, I really appreciate it.” Caldwell said after Corporate Charlie’s win. “I run kind of a different operation where I’m more hands on. I’ve got a great team and surround myself with successful people and that’s why we win.”

Caldwell had shared the season record for wins by an owner with Gary Owens of Mustang, Okla. Owens horses won 36 times during the 2005 Remington Park season.

The final weekend of the Remington Park Thoroughbred season continues Saturday and Sunday, Dec. 13 & 14. Racing is at 7pm on Saturday. The season will close on Sunday with the first of 11 races at 1:30pm. The $250,000 Springboard Mile will headline the final afternoon of the season.