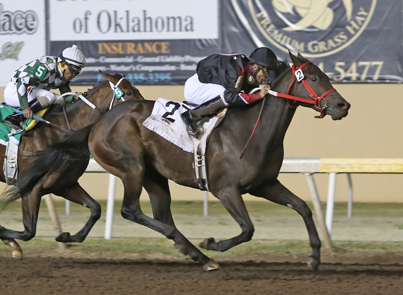 The 2014 Remington Park Thoroughbred Season comes to a close this Sunday with the $250,000 Springboard Mile headlining the 11-race program. The action, featuring four other stakes races in addition to the Springboard, is underway at 1:30pm. All times Central.

The Springboard will serve as the potential rubber match between Bayerd and Shotgun Kowboy in the three-race series of 2-year-old stakes races at Remington Park. Bayerd won the $75,000 Kip Deville Stakes in September with Shotgun Kowboy running third. Shotgun Kowboy then managed to spin the results by winning the $100,000 Clever Trevor Stakes in November with Bayerd finishing second.

Remington Park odds-maker Rick Lee kept the pair close in the morning-line odds. Shotgun Kowboy is the slight favorite at 2-1 odds with Bayerd just behind in the line at 5-2 odds.

Both Bayerd and Shotgun Kowboy are owned by Oklahomans. Clark Brewster of Tulsa campaigns the Kentucky-bred Bayerd while C.R. Trout of Edmond serves as the owner/trainer/breeder of Shotgun Kowboy, an Oklahoma-bred.

The tale of the tape has Shotgun Kowboy ahead in career wins with three, having also won the $86,000 Oklahoma Classics Juvenile in October here. Bayerd has two victories with his romping 11-1/2 lengths maiden triumph at Saratoga in upstate New York in August also on his resume. Bayerd is trained by Remington Park’s leading conditioner, Steve Asmussen.

Hall of Fame trainer D. Wayne Lukas has entered Hillbilly Style to the Springboard for owner Willis Horton. The duo saw Will Take Charge run second in the 2012 Springboard Mile before going on to earn Champion 3-year-old honors in 2013 after winning the Travers Stakes at Saratoga in upstate New York, the Pennsylvania Derby at Parx in Philadelphia and the Clark Handicap at Churchill Downs in Louisville. Will Take Charge also raced in all three legs of the Triple Crown last year.

Hillbilly Style is still a maiden after six attempts with a pair of second-place finishes in his last two starts at Churchill Downs. Jockey Jon Court has been named to ride Hillbilly Style, installed at 15-1 odds on the morning-line.

It’ll Be Fine comes into the Springboard off an allowance win at Aqueduct in New York City in November. Trained by Ken McPeek, who is partners with Christopher Carper as owners of the Greatness colt, It’ll Be Fine has won two of his seven career starts. He was fourth in his only stakes attempt, the $75,000 Sunday Silence Stakes over the Louisiana Downs turf in Bossier City in September. Chris Landeros has been named to ride It’ll Be Fine who is 20-1 on the morning-line.

Jockey Joe Bravo will ride High Noon Rider who is the third-choice in the morning-line odds at 3-1.

Owners Wayne Sanders and Larry Hirsch of Dallas have two runners in the Springboard. Phenomenal Phoenix, trained by Donnie Von Hemel, broke his maiden on Nov. 5 by 5-1/2 lengths. Conbradulations, trained by Bret Calhoun, broke his maiden status here in September and was second in an allowance event here in October.

Phenomenal Phoenix and Conbradulations will compete coupled, as a same-owner wagering entry at 12-1 odds in the morning line. Cliff Berry, Remington Park’s all-time leading jockey, was named on both runners at entry time this morning.

The Remington Park final weekend of live Thoroughbred action this season is on Dec. 12-14 will feature racing at 7pm on Friday and Saturday nights. The season will close on Sunday, Dec. 14 with the first of 11 races at 1:30pm. The $250,000 Springboard Mile will headline the final afternoon of the season.