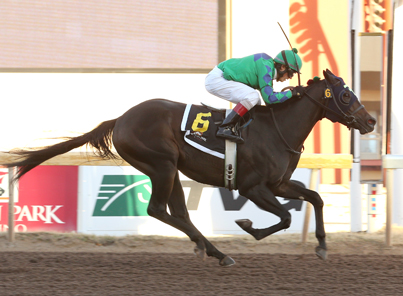 Black Friday afternoon racing at Remington Park featured a pair of divisional races for the Oklahoma Stallion Stakes. Okey Dokey Kyle won the race for the 2-year-old colts and geldings while Dancing Diva won the division for 2-year-old fillies. Both divisions were contested at six furlongs and worth $55,000.

Okey Dokey Kyle, a son of Tactical Cat, took the lead shortly after the start and despite floating very wide going around the lone turn in the sprint, managed to regain his composure coming down the stretch to win by 2-3/4 lengths. Kenny Do The Math, by Ellerton, was second with Fast Chance, by Mr. Nightlinger, finishing third.

Owned and bred in Oklahoma by the Sulphur, Okla. partnership of Ann Sachdev and Lori Bravo, Okey Dokey Kyle is trained by Francisco Bravo and was ridden by Quincy Hamilton. Okey Dokey Kyle stayed perfect in his brief career with his second win in as many starts, both this season at Remington Park. He covered the ground in 1:11 over a fast track.

Okey Dokey Kyle is a gelding by Tactical Cat, who stands at Raywood Farm in Arcadia, Oklahoma, from the Star Dabbler mare Memory Divides. He made $33,000 for his second career score to up his overall total to $43,439.

In the Filly Division of the Oklahoma Stallion Stakes, Dancing Diva sat just off the battling pace of Zanira and Stratagem, making her move for the front as the field left the turn. Under Curtis Kimes, Dancing Diva traveled four-wide into the stretch but she easily handled the extra ground, pulling clear to win by 8-1/2 lengths. Rich Uncle, by Save Big Money, was second with Zealous Vision, by The Visualiser, coming along third.

Owned by Harmony Stable of Springdale, Ark., Dancing Diva crossed the finish in 1:10.53. Trained by Boyd Caster, Dancing Diva won her second career race and improved off her second-place finish in the $86,000 Oklahoma Classics Lassie in October.

The win was worth $33,000 to Dancing Diva, raising her overall earnings to $70,393. An Oklahoma-bred filly by Affirmatif from the Pure Prize mare Midsummer Magic, Dancing Diva was bred by Hidden Springs Ranch. The victory made Dancing Diva the first stakes winner for Affirmatif, a son of Unbridled’s Song who stands at Caines Stallion Station in Wynnewood, Oklahoma.