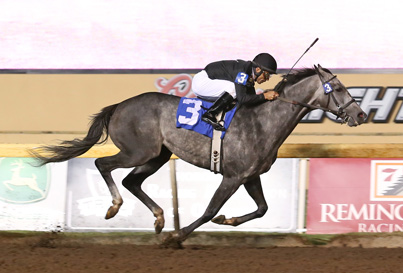 The $1 million Oklahoma Classics night of racing is just under three weeks away at Remington Park. Saturday evening’s card featured many allowance races that served as prep events for the various divisional runners who will compete in the rich evening for Oklahoma-bred runners in October.

Z Rockstar won the $44,625 allowance prep for the Classics Cup, handling one mile in 1:37.82 and defeating Imahit by 1-1/2 lengths. Owned and bred by Robert Zoellner of Tulsa, Okla. and trained by Donnie Von Hemel, Z Rockstar finished third behind Imahit in the Oklahoma Classics Cup in 2013.

The prep win for Z Rockstar was his 11th from 37 career starts and his fifth score at Remington Park. A 5-year-old gelding by Rockport Harbor from the Nasty and Bold mare Nasty Little Star, Z Rockstar picked up $25,761 to boost his career earnings to $440,439. Luis Quinonez was up for the allowance win.

Other winners of the allowance race preps for the October 17 Oklahoma Classics included: What Lola Wants in the Distaff Sprint prep; More Than Even in the Distaff prep; Crusin’ Main in the Sprint prep and Perfect To Please in the Turf prep.