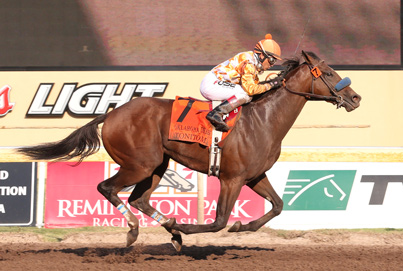 Tonito M. rallied wide off the final turn then pulled clear with an impressive 2-3/4 length score in the Grade 3, $400,000 Oklahoma Derby on Sunday afternoon at Remington Park.

Relaxed just six lengths off the lead for the first half of the race, Tonito M. waited until midway through the final turn before accelerating for the front. Moving into the homestretch Bejarano angled his colt outside of three rivals for his big run to the finish where he covered the 1-1/8 miles in 1:50.41 over a fast track.

“I had a very good trip. The horse broke really good. This time I tried to get him inside a little bit and get him to come from behind,” Bejarano said describing his race strategy and trip. “By the half-mile, I felt like I still had a lot of horse. I made sure to get him clear into the stretch and when we got to the stretch it was done and drew off.”

Louies Flower, winner of the 2013 Springboard Mile at Remington Park, ran his biggest race since scoring the top 2-year-old stakes race. Under Luis Quinonez, Louies Flower was sent to the front from the start of the derby and he maintained the lead until the field went to the second turn when Bay Of Biscay moved inside of him to challenge.

Wildcat Red, the even-money wagering favorite, appeared poised to take over coming into the stretch with a three-wide advance but could not make the front. “I think he had a perfect trip,” said jockey Edgard Zayas. “They just ran him off and he didn’t have problems. He broke good out of the gate. He just got beat.”

The Oklahoma Derby win was the seventh from 13 career attempts for Tonito M., a Kentucky-bred colt by Rock Hard Ten from the Dixieland Band mare Esther’s Big Band. The 3-year-old was bred by Hilbert Thoroughbreds & Menard Thoroughbreds.

The victory by Tonito M. came in a field of 14 for the Oklahoma Derby, equaling the largest field for the race ever. It was the most to contest the derby since 1991 when Queen’s Gray Bee was the best in a 14-horse field.

The Oklahoma Derby was the main event on a stakes-laden Sunday afternoon program, featuring many divisional events.

$200,000 Remington Park Oaks
Winless in seven starts since breaking her maiden last October at Belmont Park, celebrity chef Bobby Flay’s America has hooked horns with a veritable “who’s who” of the female sophomore class, including Untapable, Stopchargingmaria and Room Service. The A.P. Indy filly hoped to change her luck with a change of scenery.

America shipped to Oklahoma City from her New York base and the barn of Hall of Fame trainer Bill Mott to take on a new group of fillies at Remington Park on Sunday. Unfortunately for America, her next visit to the winners’ circle has to wait once again, as Shanon Nicole proved to be untouchable in the $200,000 Remington Park Oaks.

Shanon Nicole stalked the early pace set by Swing It Dish, who went :24.13 seconds for a quarter-mile, :47.72 seconds for a half-mile and 1:12.41 for three quarters of a mile. America, ridden by Junior Alvarado, held an outside position closer to the pace. Shanon Nicole, under Rosie Napravnik, inched forward in the final turn, then flew into the stretch with the lead on her way to a 5-1/4 length triumph.

“I had a really nice inside trip,” Napravnik noted. “My filly is so cool to ride. She gets where she wants and she loves to come up the inside. She put in a great run today.”

America faded to fourth, five lengths behind the leader at the top of the stretch and 12 ½ lengths behind Shanon Nicole at the wire. “I thought I got a good trip for her,” Alvarado said. “At the three-eighths pole, I was trying to pick it up but she was struggling. I was riding and riding and she just stayed steady. I don’t think she really handled the track all that well.”

While America came up empty, the Mike Maker-trained Shanon Nicole thrived while covering the 1-1/16 miles of the Oaks in 1:44.33. Texas-bred Thegirlinthatsong, a daughter of Valor Farm stallion My Golden Song, finished second with Haveyougoneaway third.

Named for the owner’s daughter, Shanon Nicole is the first homebred for Connie Apostelos of Kettering, Ohio, who has owned racehorses via sales or claiming races since 2009. A 3-year-old filly by Majestic Warrior from the Patton mare Crafty Wac picked up $120,000 for the Oaks win, her fourth from 13 career starts. She has now earned $297,308 overall.

$100,000 Remington Green Stakes
Earlier this week, trainer Mike Tomlinson described his turf contender Greengrassofyoming as “one of those ‘Rodney Dangerfields that don’t get a lot of respect,” while calling him “one of the most underrated horses I’ve ever trained.”

Sunday at Remington Park, Kentucky-bred 4-year-old son of Quest proved himself a worthy competitor. Greengrassofyoming flew down the middle of the lane to upset the favored Gentleman’s Kitten in the $100,000 Remington Green Stakes on the Oklahoma Derby undercard on Sunday.

Under the services of jockey Brian Hernandez Jr., Greengrassofyoming settled mid-pack on the inside following a pace set by last year’s Oklahoma Derby winner, Broadway Empire. The gelding found enough room on the inside to improve his position and switched to the outside to charge down the stretch. Greengrassofyoming easily passed Gentleman’s Kitten and kicked clear to win by 1-1/4 lengths.

“He traveled like a winner the whole race,” Hernandez said after the race. “We had a great trip on the outside of horses. I just kind of stayed out of his way and when I called on him, he ran home for me. He showed today that he’s capable of this type of effort.”

Owned by Patricia’s Hope LLC of Barrington, Ill., the gelding came into the Green off a fourth-place finish in an off-turf stakes race at Mountaineer in West Virginia on Aug. 2. He had posted only four wins from 24 lifetime starts.

“This horse has always had the talent, but he hasn’t been a lucky horse,” Tomlinson said. “From here on, we’ll keep trying. He’s improved with age and hopefully we’ll be able to pick up some more big races.”

This was the first stakes win at Remington Park for Tomlinson, a native of Mustang, Okla., since moving his training operation to Kentucky full time in the mid-1990s.

“It feels fantastic. This is ‘old home’ week,” Tomlinson said. “We’re with a lot of old friends, so it’s been a real experience. It was fantastic to see old friends and get to win and let them share it with us.”

Greengrassofyoming was bred in Kentucky by Stone Farm and is our of the Dehere mare Flick. The Green is his fifth career win and was worth $60,000 to run his total bankroll to $240,494.

Heitai blistered an opening quarter-mile fraction of :21.26 seconds and a half-mile of :43.50 seconds but the five-length lead he held throughout the race wilted away in the final furlong. Mico Margarita got up to win in the final yards by three-quarters of a length. Heitai held second with Ghost Is Clear another 3-1/2 lengths back in third.

Owned by J. Kirk Robison of El Paso, Texas and trained by Steve Asmussen, Mico Margarita was ridden with confidence by Rosie Napravnik. He is a 4-year-old colt sired by Run Away And Hide from the Mineshaft mare Wide Range and was bred in Kentucky by Ron Kirk & Greg McDonald.

Mico Margarita paid $4.80 to win, $2.60 to place and $2.10 to show and was the 7-5 favorite while coupled in the wagering with Wine Police, last year’s winner of the Remington Park Sprint Cup. Heitai was the 2-1 second-choice in the wagering and paid $4.00 to place and $3.20 to show. Ghost Is Clear was last in the early running, over 17 lengths from the leader after a half-mile was run before coming on late to finish third and pay $2.80 to show.

After a head and head tussle with Nublado Bling through much of the race, the patient ride of jockey Rosie Napravnik allowed Bayerd to repel all challenges and cover the six furlongs in a time of 1:09.91 over a fast track. The 2-year-old colt by Speightstown, who won an Eclipse Award after being named the 2004 Champion Sprinter, had won his previous race, a maiden special weight event at Saratoga Race Course by 11-½ lengths.

Bayerd has now won two of three career starts and earned $45,000 in the Kip Deville to move his lifetime bankroll to $112,100. Bred in Kentucky by Alpha Delta Stables, Bayerd is out of the Cherokee Run mare Cherokee Jewel.

Following the race, Asmussen confirmed that the colt will take the next step in the Remington 2-Year-Old Triple of stakes races by competing in the 7-furlong $100,000 Clever Trevor Stakes on November 7. The final leg in the three-race series is the 1 Mile $250,000 Remington Springboard Mile on closing day, Sunday December 14.

Ridden by Jareth Loveberry, Fast N Fine Lookin launched from the starting gate and never looked back, leading throughout. She handled six furlongs in 1:09.72 over a fast track. Away at 5-1 odds, Fast N Fine Lookin paid $13.20 to win, $6.60 to place and $4.60 to show.

Dancin’ Lil was second and returned $4.60 to place and $3.40 to show. Texas-bred Lasting Bubbles was the beaten 5-2 wagering favorite, finishing third for a $3.40 show payoff.

Bred in Kentucky by Hermitage Farm, Fast N Fine Lookin won her third race from four career starts and her second at Remington Park. She is by Forestry from the Unbridled’s Song mare Somethingintheway. The winner’s check of $30,000 boosted her overall earnings to $63,738.

$50,000 Ladies On The Lawn Stakes
Ridgeofstone rallied from mid-pack in the 7-1/2 furlong turf event for older Oklahoma-bred fillies and mares, posting a three-quarter length win over 5-2 wagering favorite Bringinginthelute who rallied but could not catch the winner.

Owned by Al and Bill Ulwelling of Elk River, Minn., Ridgeofstone is trained by Michael Biehler and was ridden by Jareth Loveberry. She handled the distance over firm going in 1:28.19.

A 7-year-old mare by Sand Ridge from the Upmost mare Happy Giggles, Ridgeofstone won for the sixth time from 36 races and for the very first time at Remington Park in her 10th attempt in Oklahoma City. She was bred by Chris Watson.