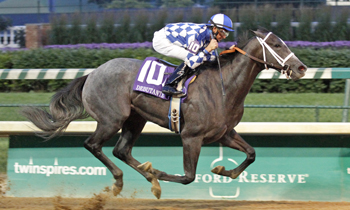 Fiftyshadesofgold, last year’s Texas Champion 2-Year-Old Filly and one of the nation’s top 3-year-old fillies this year, has been retired from racing.

The Texas-bred ran in the Grade 3 Dogwood Stakes at Churchill Downs on September 20 and came back sound after the race. However, her foreleg swelled up mid-week and an ultrasound revealed a significant tear in her left fore suspensory.

“She was certainly one of the best I’ve ever trained. She was the total package—a grand individual, was very fast and could carry it, a great mind and a big heart to go with it,” said trainer Bret Calhoun. “I regret that she didn’t get the Grade 2 stakes win when she had the rough trip last summer in the Adirondack at Saratoga and didn’t get the Grade 1 win in the Test when she drew the tough inside post and was beaten a length and two noses.”

Bred by the late Clarence Scharbauer Jr., Fiftyshadesofgold was born and raised at his Valor Farm near Pilot Point, Texas. The filly is now owned and raced by Scharbauer’s son, Douglas.

“Of course I’m disappointed that her racing career is over, but more than that, I’m so glad that she is sound and can go on to the breeding shed,” said Scharbauer. “Given her talent and looks, I think she will make a great broodmare.”

Fiftyshadesofgold is a daughter of Valor Farm stallion My Golden Song out of Hadif Cat, a mare by former Valor stallion Hadif. Fiftyshadesofgold earned $420,531 with a record of 9-4-1-1 and stakes victories in the Eight Belles Stakes (G3) and Debutante Stakes at Churchill Downs and the Two Altazano division of the Texas Stallion Stakes at Sam Houston Race Park.