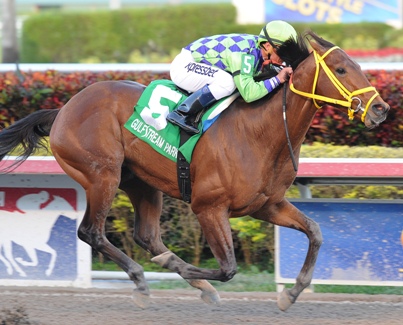 The Remington Park starting gate may burst at its welded seams on Sunday afternoon as a full field of 14 has entered the Grade 3, $400,000 Oklahoma Derby.

The 1-1/8 miles Oklahoma Derby is the eighth of 10 events on a stellar card that begins at 1:30pm. The race is scheduled for an approximate start time of 4:46pm. All times Central.

If all actually start the race, it will be the largest field in the Oklahoma Derby since 1991 when Queen’s Gray Bee won the race, known then as the Remington Park Derby.

Hollendorfer shipped Tonito M. from his southern California base, along with others for stakes races on the undercard. The traveling party arrived to the Remington Park stable area on Wednesday night. Tonito M. was third in his last start, the $400,000 Los Alamitos Mile on Sept. 6. He was also third in the Grade 2, $500,000 Los Alamitos Derby in July behind Shared Belief, thought by many to be the top 3-year-old in the nation right now.

Those trained by Bill Mott, including Charge Now, arrived at Will Rogers World Airport just after Noon today from his Belmont Park base. Charge Now was seventh in the Grade 1, $1,250,000 Travers Stakes at Saratoga in upstate New York in his last start in August.

The Oklahoma Derby morning-line favorite is Wildcat Red at 5-2 odds. Remington Park odds-maker Rick Lee put the label on him, noting the solid race overall. “A field with plenty of talent and 14 horses, should make for a tremendous betting race.”

After running 18th in California Chrome’s Kentucky Derby at Churchill Downs in May, Wildcat Red finished third this summer in the Grade 1, $1,000,000 Haskell Invitational at Monmouth Park in Oceanside, N.J. in July. Overall the D’wildcat colt has won five of 11 races and has total earnings of $865,850, tops of the 14 entered to the Oklahoma Derby. Regular jockey Edgard Zayas has been named to ride Wildcat Red who has been in the Remington Park stable area since Sept. 17 and has trained over the racing surface nearly every morning since.

Tonito M. and Ibaka share the highest number of wins of any in the field with six apiece. Ibaka is owned by Doug Wall of Norman, Okla. and trained by Bret Calhoun. Named in honor of the Oklahoma City Thunder power forward, Ibaka has won five consecutive races including an allowance here on Aug. 30.

Trainer Robertino Diodoro is back with two athletes in the Oklahoma Derby as he tries to become the first trainer to win the race in back-to-back years. He’ll send Grade 3, $200,000 Canadian Derby winner Edison to the race along with Bay Of Biscay. Diodoro saddled Broadway Empire to win the 2013 Oklahoma Derby.

The complete field by post position and program number, with trainer, jockey and morning-line odds for the Grade 3, $400,000 Oklahoma Derby: