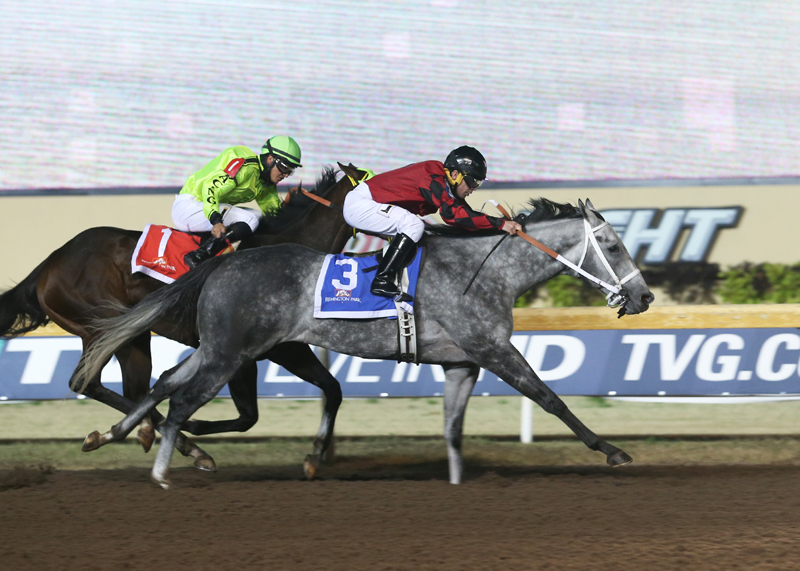 Owned by Ra-Max Farms of Claremore, Okla. and trained by Boyd Finnell, Welder broke sharply, fended off the speed-dueling challenge of Mr. N, then drew clear in the stretch under jockey Travis Cunningham. Welder prefers to go to the lead and try to hold his position. The pace in the Silver Goblin Stakes worked to his advantage as he had something left for the final drive down the lane.

“We had some help from (Mr. N) who didn’t really put the pressure on us and he was a lot more relaxed today. Tonight when we were going down the backside he was just sitting there doing his own deal. It was just like Claremore.”

Cunningham referred to Welder’s stakes success earlier this year at Will Rogers Downs in Claremore, Okla., where he won three consecutive races, including a pair of stakes events. Welder has now won four of seven starts in 2017, giving Finnell a successful year in the process.

“It’s rare, it’s nice. I’ve never had the opportunity until now and it’s really special,” Finnell said. “I appreciate him a lot.”

While Mr. N pulled alongside heading into the lone turn of the Silver Goblin Stakes, Welder was never passed, handling fractions of :22.03 for the opening quarter-mile, :44.38 for the half-mile and 1:09.35 for three-quarters of a mile. Welder crossed the finish in 1:16.16, a half-length ahead of Mr. N. Star’s Valentino rallied for third, five lengths behind the winner.

Welder gave all of his connections their first victory in the Silver Goblin Stakes. Bred in Oklahoma by Center Hills Farm, Welder is a 4-year-old gelding by The Visualiser from the Tiznow mare Dance Softly. He picked up $30,000 for the win to run his career totals to $305,601.

Jockey Richard Eramia won the final race on Friday with Walker’s Way ($6.80 to win). The score in the $5,000-level claiming event was his 1,996th in North America. Eramia has seven mounts on Saturday at Remington Park.