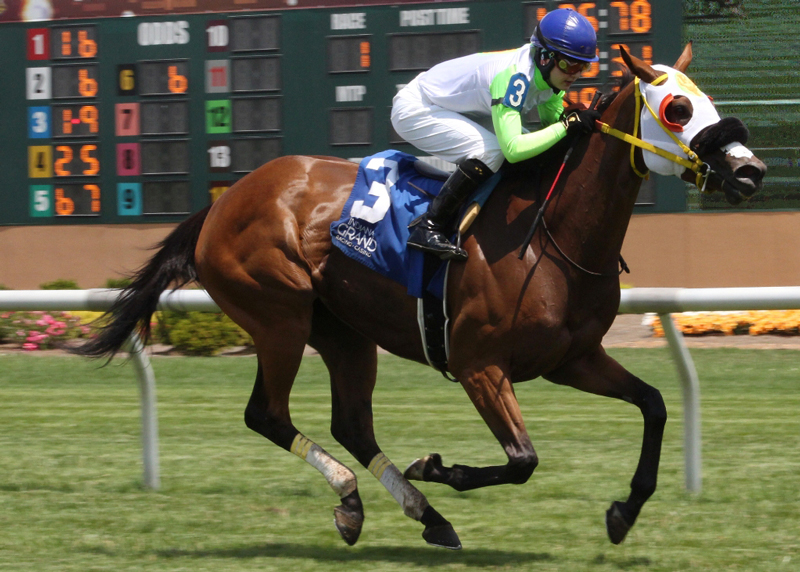 Two-time Indiana Horse of the Year Lady Fog Horn is retiring. The five-year-old homebred daughter of Zavata left Indiana Grand Tuesday, Oct. 31 to begin the next phase of her career in the broodmare ranks.

Lady Fog Horn made her first start at Indiana Grand August 23, 2014 for Stuart Grant’s The Elkstone Group and Trainer Tony Granitz. Her first win was recorded Oct. 11, 2014 in a $34,000 Maiden Special Weight with Malcolm Franklin aboard.

Lady Fog Horn’s career really took off as a three-year-old when she won five of seven races, including four stakes races in Indiana before completing her season with a second place finish in the $100,000 Grade III Cardinal Handicap at Churchill Downs. The talented Indiana bred filly returned at four with the same success, winning five of seven starts, including three Indiana stakes and topping the year off with a win in the Grade II $200,000 Fall City Handicap at Churchill Downs. Lady Fog Horn competed in four races in 2017, never finishing worse than third in any of those starts with her last outing a win over Indiana Grand’s turf course with standout apprentice rider Katie Clawson aboard.

“Lady went out on a winning note and it was neat to have the win with Katie (Clawson) for her last win,” said Granitz, who trained the five-year-old during her entire racing career. “She was unbeaten on the turf in Indiana and the most exciting race was her Grade II win at Churchill Downs (Fall City Handicap).”

In all, Lady Fog Horn completed her career with 14 wins in 26 career starts and $824,273 in purse earnings. The Graded Stakes winner raced at five different tracks and won races at three of those. She was piloted by seven different jockeys over her career with four different jockeys winning races with her. Albin Jimenez guided her to the most wins of 10 during her career. She won five of her eight career turf races and nearly $200,000 of her earnings was recorded on the grass. Her total career earnings tally makes her the leading Indiana bred Thoroughbred of all time in Indiana horse racing history.

In addition to establishing herself as the state’s all-time leader in earnings, Lady Fog Horn represents the lucrative breeding opportunities in the state. In addition to her purse earnings, The Elkstone Group received Breeder’s awards of $304,230 while the Stallion Owner’s awards amounted to $103,625. This, combined with her purse earnings, brings the tally to $1,232,128 that was distributed during the career of Lady Fog Horn.

“I would like to thank the whole team, from the people that raised Lady to the crew at the track,” said Granitz. “It was a great journey with her and I’m very appreciative that Stuart (Grant) gave me the opportunity to train her.”

Lady Fog Horn was raised on a farm in Kentucky before relocating to The Elkstone Group’s training center in Camden, S.C. She was broke by Donna Freyer as a two-year-old before she arrived in Indiana to begin her racing career under the direction of Granitz.

“If Stuart (Grant) decides to breed Lady, it would be a great thing to have her babies race in Indiana,” added Granitz. “It was a little emotional for our whole team when she left our barn for retirement.”