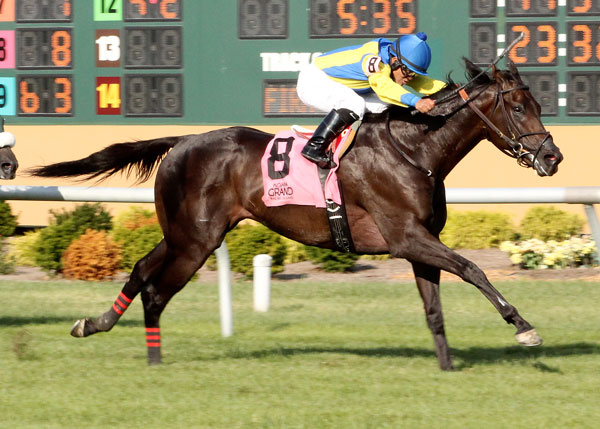 Victor Jara and 2016 Leading Jockey Fernando De La Cruz exploded in the stretch to take home the title in the 12th running of the $100,000-added A.J. Foyt Stakes Wednesday, Sept. 7. The stakes race was one of four on the card for a special afternoon of turf stakes featuring the $200,000 Centaur Stakes (Listed) at Indiana Grand Racing & Casino.

A one-time claimer, Victor Jara has stepped up his game at five. The son of Notional defeated open company in his last start over Indiana Grand’s turf course, prompting a try in the longer Foyt Stakes, a one and one-sixteenth mile event over the turf.

“We decided to try him (Victor Jara) in this race off of his last turf race,” said Trainer Joe Davis. “He ran so big against open company, so we wanted to take a shot with him. He’s been doing great this year and training super.”

Victor Jara got his shot at the Foyt title from post eight in the 12-horse lineup. His early speed got him into good early position along the outside of race leader and race favorite Derby Express and Malcolm Franklin. Victor Jara tracked closely behind Derby Express through fractions of :22.32, :47.59 and 1:11.26 before De La Cruz let him have his head. Up to that point, the Peruvian-born jockey had a strong hold on Victor Jara.

Around the final turn, Victor Jara challenged Derby Express for the lead and halfway through the stretch, he got his wish, drawing off from the field with an explosive move that placed him two and one-quarter lengths ahead of Derby Express at the finish. Logan Creek and Leandro Goncalves saved ground along the inside and moved gamely into third.

“I thought the speed horse would be the two (Derby Express),” said De La Cruz, who earned his 90th win of the meet aboard Victor Jara. “I just wanted to wait for the stretch and just keep him running.”

Victor Jara paid $18.40, $8.40, and $6.60 across the board for the upset victory. Kingswood Farm, owned by Roderick Wachman, bred and still owns the gelding, who is now on a two-race win streak. Kingswood Farm is located outside of Lexington, Ky. and Wachman, a native of Ireland, concentrates on not only breeding and raising Thoroughbreds but also works as a Bloodstock Agent. The latest star from his operation, Victor Jara, increased his career bankroll to more than $200,000 with his Foyt Stakes win. The gelding has been with Davis his entire career.

“I’m not sure where he will race next,” said Davis. “We haven’t looked at anything further than this race today.”