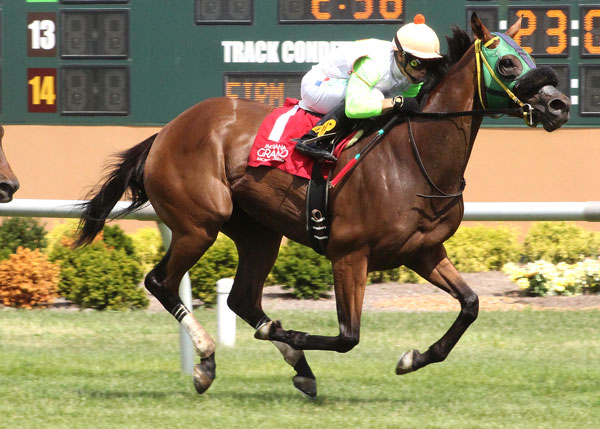 It’s always fun to watch a talented racehorse on the track and Lady Fog Horn is a perfect example of that. The 2015 Indiana Horse of the Year earned her second consecutive win in the 13th running of the $100,000-added Florence Henderson Stakes for registered Indiana bred three-year-old and up fillies and mares. Guided by 2015 Leading Jockey Albin Jimenez, Lady Fog Horn completed the one and one-sixteenth mile turf event to win her fifth career stakes race at Indiana Grand Racing & Casino.

Starting from post one placed an interesting strategy on the race. Lady Fog Horn is known for her quick speed from the gate, but several others in the field also had the same capabilities. When the gate sprung open, Jimenez opted to allow others to race to the lead, sitting Lady Fog Horn to the back of the first pack of seven. Lady Fog Horn found her spot along the outside of the group of horses as Sweet N Wicked and Rodney Prescott powered to the lead from the extreme outside post nine. The top pair was joined by Heart’s Song and Brian Hernandez Jr. along the inside and Naked Bootleg and Richard Bracho on the outside.

Down the backstretch, Sweet N Wicked controlled the fractions and the pack stayed tightly bunched through fractions of :23.07, :46.99 and 1:10.35. Just as the field began heading into the final turn, the purple and green blinkers of Lady Fog Horn could be detected moving on the outside of horses in authoritative fashion. At the top of the stretch, Lady Fog Horn took over and moved out by a couple of lengths margin for the drive home, winning by one and one-quarter lengths at the finish over Heart’s Song, who moved into second on the inside over Sweet N Wicked, who maintained positioning for third. The final time of the race was 1:41.17.

“She (Lady Fog Horn) loves to be on the outside,” said Trainer Tony Granitz during a winner’s circle interview with Peter Lurie. “She was ready for today. On the way over here she was excited. In fact, this morning when we gave her a bath she was ready to go. You could tell she had her game face on.”

Lady Fog Horn was bet down as the heavy favorite of the field, paying $3.20, $2.20, $2.10 across the board. It was her 11th career win in 19 career starts for Stuart Grant’s The Elkstone Group. Her win in the Florence Henderson boosted her career earnings to more than $523,000, which officially makes her one of the top five richest Indiana bred fillies of all time.

“She (Lady Fog Horn) was wound up before the race,” said Jimenez, who has ridden her in all five of her stakes wins. “Even in the post parade she was ready to go. She’s normally not like that so I knew she was ready. After the race when we were coming back, she still wanted to go. I reached up and patted her to get her to calm down and told her ‘It’s okay, you already won.’”

Lady Fog Horn is very versatile. She has proven skills on both the turf and the dirt and at varying distances. Granitz already has a plan mapped out for her.

“She has two more Indiana stakes here this year,” said Granitz. “Then, we will see where we will go after that. It’s great to get to stay here and race her. The turf was beautiful today. I talked to the trackman Roy Smith this morning. They moved the rail inside and the turf was firm. She loved it. You can tell by the time that it was a perfect turf today.”