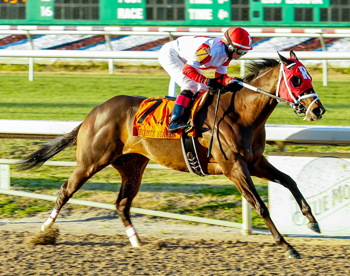 Louisiana-bred Vicar’s in Trouble not only put himself on the trail to the Kentucky Derby with a dominant 6 ¾-length victory in Saturday’s Grade 3, $200,000 Lecomte Stakes at Fair Grounds Race Course, but the 3-year-old also became the first graduate of an Equine Sales Company auction to win a graded race.

The Into Mischief colt, who was bred by Spendthrift Farm LLC and runs for Eclipse Award-winning owners Kenneth and Sarah Ramsey, sold for $8,000 at Equine Sales Co.’s Inaugural Yearling Sale in 2012 in Opelousas, Louisiana. The colt was purchased by Clyde Taylor from the consignment of Mark Toothaker, agent, and later sold for $80,000 at last year’s Fasig-Tipton Midlantic 2-Year-Olds in Training Sale.

“We had our first stakes-winning graduate this past summer at Evangeline Downs with Solid Sender, and now we have a major stakes winner coming out of that same sale,” said Sales Director Foster Bridewell. “I think that proves Louisiana-breds and graduates of our sale can run and win against any level of competition.”

Mike Maker trains Vicar’s in Trouble, and his assistant Joe Sharp indicated the new graded stakes winner would be pointed to the February 22 Risen Star Stakes (G2) at Fair Grounds.

Vicar’s in Trouble began his career with a third-place finish in a maiden race at Keeneland before scoring by 13 lengths against maidens at Fair Grounds. The Lecomte was just his third career start, and the 97 Beyer Speed Figure he earned is the highest of any 3-year-old in the young season. Vicar’s in Trouble picked up 10 points for the win to move into the top 10 of Churchill Downs’ Road to the Kentucky Derby Leaderboard.

Equine Sales Co. has scheduled its inaugural 2-year-olds in training sale for April 28 of this year, with the breeze show set for April 26. For more information, visit www.equinesalesla.com.