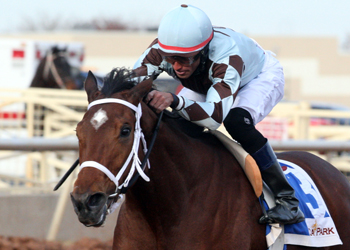 Zia Park Oaks champion Unusual Way leads a field of eight fillies in the second running of the $400,000 Houston Ladies Classic at Sam Houston Race Park. The richest Thoroughbred race in Texas will take place on Saturday, January 25 with three additional stakes on the card.

Unusual Way, who captured the $300,000 Zia Park Oaks on November 27 for trainer Jeff Bonde, will be one of the top contenders in the mile and one-sixteenth main track feature. The California-bred daughter of Unusual Heat is closing in on the $600,000 career earnings mark with five wins from 14 starts. Rider Edwin Maldonado, who was an apprentice at Sam Houston 12 year ago and is now one of the top jockeys in Southern California, will ride Unusual Way.

“This filly comes to run every time,” said Bonde.“Maybe she’s part gypsy; she’s always been a good shipper and we are looking forward to coming to Houston.”

Bonde has run at Lone Star Park, but this will be his first trip to Sam Houston. Bonde and Maldonado will arrive on Saturday on the private jet of Edward J. Brown Jr., who owns Unusual Way in partnership with Philip Lebherz. All three are very proud of the success that Maldonado has had in California.

“I didn’t know he had the ‘bug’ in Houston,” said Bonde. “He’s done very well for us and is a great rider.”

The winner of the inaugural Houston Ladies Classic was Joyful Victory, who set a new track record for the distance of a mile and one-sixteenth under jockey Rosie Napravnik.

“That was a great night,” said Napravnik. “Every time I’ve gone to Sam Houston, I’ve done well. I love the track there, especially the grass course. It’s always good racing, a good crowd, and good money, so I look forward to going back.”

She will ride Awesome Flower for trainer Michael Maker in the 2014 Houston Ladies Classic. The 5-year-old Flower Alley mare is owned by Sarah and Kenneth Ramsey and ran third in the Grade 2 Chilukki Stakes at Churchill Downs and made her last start in the Grade 3 My Charmer Handicap at Calder Race Course on December 7.

And Why Not will ship from Florida on Wednesday for trainer Michael Matz. The 5-year-old mare ran fourth to Princess of Sylmar in the Grade 1 Beldame Invitational last September at Belmont Park. Matz, a distinguished member of the United States Olympic Equestrian Team, is an extremely accomplished Thoroughbred trainer, best known as the conditioner of 2006 Kentucky Derby winner Barbaro. Jockey Luis Saez, who celebrated his 1,000th career win milestone on January 11 at Gulfstream Park, will pilot the daughter of Street Cry. She is owned by Helen Groves, whose youngest daughter is married to Matz.

“She’s had a rest and runs well fresh,” said Matz of And Why Not. “This race was important to Mrs. Groves. She’s been running against some top quality mares and we hope this will be her night to break through.”

Rose to Gold, another top-caliber filly, has already arrived in Houston from her Florida base. Trainer Sal Santoro has done well shipping the daughter of Friends Lake, who won both the Grade 3 Honeybee and Fantasy Stakes at Oaklawn Park, punching her ticket to the Grade 1 Kentucky Oaks last May at Churchill Downs. Her regular jockey Jesus Rios will break from the rail aboard the chestnut filly.

Trainer Ron Faucheux will saddle Class Included for owner Brittlyn Stable. The 6-year-old mare has earned $552,156 and has run in several top graded stakes, including the 2012 Breeders’ Cup Ladies Classic. She won her last two stakes, the Treasure Chest at Delta Downs and the Blushing K. D. Handicap over the Fair Grounds turf course last month.

“We had the Houston Ladies Classic as our target after her win at Delta,” explained Faucheux. “The Fair Grounds race on turf was a good prep for this. She came out of it fine and worked an easy five-eighths of a mile on Saturday.”

Class Included will van over from New Orleans on Wednesday. Jockey Shaun Bridgmohan will ride the daughter of Incude.

The remainder of the field includes Dixiana Farms LLC Moon Philly, who has won multiple stakes at Delaware Park and Laurel. The Malibu Moon mare is trained by Ben Colebook and will be ridden by Julien Leparoux. Trainer Eric Reed will give a leg up to Deshawn Parker aboard the Tapit filly Phonybooksnrecords, owned by Jerry Jamgotchian. Owner Hugh Moore and trainer Joyce Salisbury have the final contender in the field in the Kitten’s Joy filly Do You Like Me Now, who will break from post position seven under Fabio Arguello Jr.

“We are very proud of the quality field in the Houston Ladies Classic,” said Eric Johnston, Sam Houston Race Park’s vice-president of racing. “Each of our four stakes for Saturday drew competitive fields with nationally prominent horses and racing connections. This weather looks great and it should be an exceptional night of racing at Sam Houston Race Park.”

The Houston Ladies Classic will be the first stakes of the inaugural Penn Gaming Racing Challenge. The national program will incorporate over 20 stakes races in 2014 worth over $5.5 million. The stakes will take place at Hollywood Casino at Charles Town Races, Hollywood Casino at Penn National Race Course, Sam Houston Race Park, and Zia Park. The Challenge includes tie-ins between groups of races in the series, as well as bonuses and prizes that include free nominations, refund of entry and starter fees, and trips to the PNGI owned M Resort in Las Vegas.

Advance wagering for the January 25 card will be offered on Friday, January 24.

He won 37 races in the 2002/2003 Thoroughbred racing season with an extremely memorable score on March 2. He set the toteboard on fire, winning the third race aboard Adjalon, a 3-year-old gelding trained by Jernesto Torrez, who paid a whopping $125.00 to win.

Since he began riding in 2002, Maldonado, 31, has made a steady ascent up the ladder and had his most successful showing in 2013. In July, he tied Rafael Bejarano, one of Southern California’s most gifted jockeys, for the rider title at Betfair Hollywood Park. He booted home 190 winners and purses of $8.3 million, concluding the year as the 20th leading rider in North America, according to Equibase statistics.

His success has come as no surprise to Sam Houston’s clerk of scales Walter Layland, who has seen a slew of young riders make their debut in Houston.

“He was very quiet and respectful to everyone,” recalled Layland. “I knew he had a ton of talent.”

Peter Lurie Will Host the HRTV Live Telecast
In a partnership announced earlier this month, HRTV, “The Network for Horse Sports,” will broadcast a two-hour special beginning at 9:00 pm (CT) from Sam Houston Race Park on January 25th. The special will include live race coverage and special events as part of the stakes-filled card highlighted by the 2nd Annual $400,000 Houston Ladies Classic and the Grade 3, $200,000 John B. Connally Turf Cup.

Peter Lurie, HRTV’s racing analyst, will make the trip to Houston to anchor their live coverage of the evening’s stakes races.

Promotions Lend Excitement to Saturday Evening
In honor of the $400,000 Houston Ladies Classic, Sam Houston Race Park has joined forces with the Houston affiliate of the Susan G. Komen ® and will donate $1 for each patron to benefit the esteemed charity.

“We are thrilled about the opportunity to partner with Sam Houston Race Park for the $400,000 Houston Ladies Classic, said Adriana M. Higgins, Ed.D., Komen Houston Executive Director. “We look forward to everyone coming out to enjoy the races and support Susan G. Komen for the Cure Houston in our efforts to provide community funding for breast cancer research, education screening and treatment. Last year we granted over $3 million dollars to support local programs and over $1 million for research. This year we want to do even more.”

Patrons can also show their support for the fight against breast cancer by entering the “Think Pink Hat Contest”, presented by Cadence Bank. Registration will begin at 6:00 p.m. on the Club Level of the Grandstand. The judging will take place at 8:30 p.m. and the winner will receive $500.