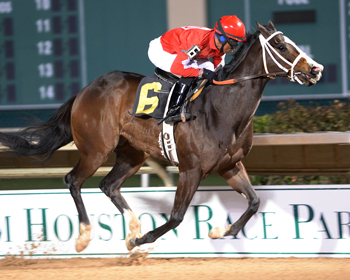 Texas Champions Weekend concluded on Saturday at Sam Houston Race Park with four $50,000 stakes for Texas-breds after a trio of stakes were contested on opening night on Friday. Here is a recap of the action:

Aces N Jacks was a game winner for owner and trainer Caroline Dodwell and became yet another stakes winner bred by Dodwell’s Diamond D Ranch out of the Wayne’s Crane mare Pure Mischief. The son of Valor Farm stallion Jet Phone broke his maiden on November 16 at Retama Park but ran ninth in his second start. A minor lung infection was to blame and the dark bay returned in top form this evening.

“He kind of faltered in his last start, but we knew not to give up on him,” said Dodwell. “My stepson Scooter has done a great job with him.”

Larry Taylor was aboard for the victory, sending the dark bay to the lead and was never pressured. He crossed the wire of the six furlong event in 1.11.39, over four lengths ahead of stakes winner Circustown Flyer and Me Commanche.

Texas Air Cruises in the $50,000 Star of Texas
Trainer Danny Pish was hoping for another big effort from Special U F O in the one-mile $50,000 Star of Texas. The 4-year-old son of Stoneview Farm stallion Special Rate was seeking his fifth consecutive win for owners Southwestern Racing LLC, but the win streak was snapped tonight with a dominant performance by Texas Air.

Allen Milligan conditions the 6-year-old gelding for owner/breeder Paul Rigali Jr. He won impressively in an allowance last month at Retama Park under rider Dakota Wood, who set his sights on Special U F O in the early stages of the one mile feature.

“Every time I asked this horse to accelerate, he did,” said Wood. “I really appreciated the connections giving me this opportunity. It means a lot.”

“We bred this horse here in Texas and are very proud of him,” said Regali. “Allen has done a wonderful job.”

“He tried and ran well in the first half mile, but hated the pressure,” said rider Junior Chacaltana of Special U F O’s uncharacteristic loss.

Triumph and Song Takes the $50,000 Spirit of Texas
Rider Junior Chacaltana had a much better result in the $50,000 Spirit of Texas Stakes guiding Triumph and Song ($3.00) to a decisive victory in gate-to-wire fashion. The 5-year-old was claimed by trainer Karl Broberg for $40,000 at Fair Grounds for new owners H & H Ranch, who earned a $30,000 return on that investment as Triumph and Song scored his second career stakes win. The winner is by Valor Farm stallion My Golden Song and was bred by Victoria Ashford and Dr. Troy Carmichael.

“Karl told me we would win and that is all I needed to know,” said co-owner Carolyn Hanak of Beaumont, Texas. “We love running at Sam Houston Race Park.”

Carolyn Barnett and David and Lana Alford’s Solar Charge, an Authenticate gelding who won the 2012 edition of the Spirit of Texas Stakes, ran second for the second year in a row. Danny Keene’s Wagson, a Wagon Limit gelding with Lindey Wade aboard, picked up the third place check.

Danny Pish’s homedbred Quiet Acceleration, ridden by Roman Chapa, closed out the Texas Champion Weekend stakes with a decisive win. He had prepped for the Richard King with a victory over the Retama Park turf course last month and ran exceptionally well this evening.

“I had a lot of horse under me, that’s for sure,” said Chapa. “The pace was slow and he just dragged me to the front. When the hole opened mid-turn, he gave me all he had. Inside the sixteenth pole, I knew we were home free.”

Pish was in New Orleans tending to Got Shades who ran in the Grade 3, $200,000 LeComte Stakes, so his son, Joe Dan, accepted the trophy and was pleased to say a few words.

“He’s a very reliable horse; our barn horse,” said Joe Dan. “He makes the money for the family.”

This was the eighth win from 26 starts for the 5-year-old son of Silent Picture, who ran fifth in last year’s Richard King.