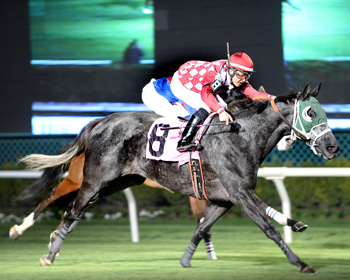 Lasting Bubbles Goes Gate-to-Wire in the $50,000 Yellow Rose Stakes
The first stakes of the evening was the $50,000 Yellow Rose Stakes with defending champion Cowgirl N Up taking on seven rivals at the distance of six furlongs. Judy Peek’s homebred Lasting Bubbles was sent to the lead under rider Fabio Arguello, Jr. and held off the late closers to capture her third career stakes victory. Trained by Kevin Peek, the 6-year-old mare held off a game effort from My Golden Belle with Jeremy Collier in the irons.

“She had done well on turf, but we were looking to get her back on the main track, said winning trainer Peek. “I was holding my breath that she would hold on and couldn’t be more pleased to have Fabio ride.”

Scooter’s Choice Returns in Fine Form for the $50,000 Bara Lass Stakes
The $50,000 Bara Lass featured a full field 3-year-old fillies at a distance of six furlongs. Trainer Bret Calhoun has had success bringing back horses off a layoff and did it again this evening with Scooter’s Choice. The daughter of Lane’s End Texas stallion Too Much Bling, owned by Wayne Sanders and Larry Hirsch, made her debut last May at Churchill Downs and was shipped to Lone Star Park, where she ran third in the TTA Sales Futurity on July 6. Lindey Wade, who won the riding title here in 2011, had the return call and was very impressed with her front-running score.

“I’m so thankful to be back in Houston,” said Wade. “The filly ran a tremendous race. She got a little hot in the post parade, but I got her to calm down. We got a good second quarter and were able to finish well.”

Jay Severs, assistant to Calhoun, saddled Scooter’s Choice and was also impressed that she was able to win her first stakes in commanding fashion.

“Nice filly coming off the layoff; big effort from her, no doubt,” said Severs. “These are great owners; we’ve had several super horses with them.”

Sanders and Hirsch have owned numerous notable Texas-breds, including Taptam, winner of the 2011 Star of Texas Stakes, and Chief of Affairs, who won the 2009 Spirit of Texas Stakes.

Scooter’s Choice, who was bred by W.S. Farish, crossed the wire in 1.11.93 and returned $18.80 as the third betting choice. Post time favorite Bakken Baby, a Valid Expectations filly running for Larry Huntsinger and Phil Head, ran second under Junior Chacaltana. Ed Few’s homebred Discreet Girl, by Discreet Cat, overcame a troubled start to close for second with Deshawn Parker in the irons.

Smiles Golden Song, bred and owned by Sylvia Baird, twice won the Fiesta Mile on the Retama Park turf course and validated her affinity for the lawn in a driving finish for her third stakes victory in the San Jacinto. It was the first win at Sam Houston Race Park for apprentice David Cabrera

“This was my first win ever at Sam Houston,” said Cabrera. “She’s a pretty nice filly. She loves the turf.”

“I was very pleased with the way she ran tonight,” said Luna. “She ran big after being off for almost a year.”

Smiles Golden Song ($4.00) covered the mile and one-sixteenth feature in 1:44.66 over the firm turf course. Vilao closed for second and Danny Burnett’s Green Briar Kitty, a Day of the Cat mare at odds of 52-1, was a game third.