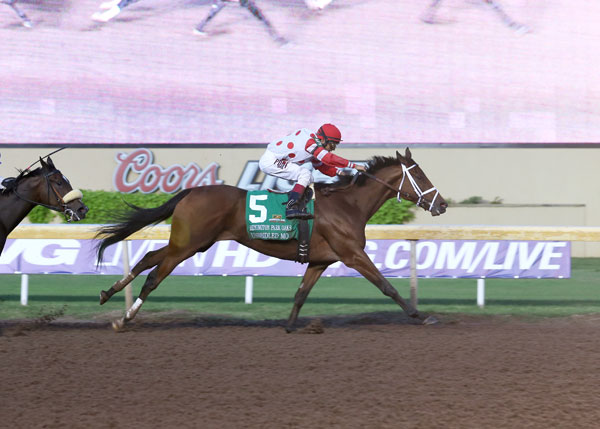 The Uncle Mo parade continued with another winner in a huge race in North America this year, as Unbridled Mo won the $200,000 Remington Park Oaks for 3-year-old fillies at 1-1/16 miles. The race was one of 10 stakes on Sunday as part of Oklahoma Derby Day.

Hall of Fame trainer Todd Pletcher had Unbridled Mo ready for the race and Hall of Fame jockey John Velasquez was in the irons, keeping the filly mid-pack in the early going. In mid-stretch Unbridled Mo quickly left four front-runners in her wake to win by 1-1/4 lengths over Ready To Confess with beaten 1-2 favorite Family Tree finishing third, 2-1/4 lengths behind the winner.

Away at generous 4-1 odds, despite the fact she had won her previous three races in a row, including the Grade 3 Monmouth Park Oaks in August for her final effort before shipping to Oklahoma. One factor that helped make Family Tree the heavy betting favorite is that she had most recently finished third to Songbird, who currently is making history as one of greatest fillies to ever set hooves on a track as she continues to pile up Grade 1 stakes victories.

In other stakes on Oklahoma Derby Day…

Geroux won for Hall of Fame trainer Steve Asmussen aboard this 3-year-old filly by Medaglia D’Oro in a time of 1:09.92, padding the states for the second-leading trainer all-time at Remington Park, who is also a member of the Oklahoma Horse Racing Hall of Fame to go with his national accolades.

The favorite in the race, Steel Cut, was just back of Wheatfield, to finish in the show spot.

Moment is Right was making her debut at Remington Park for owner Ten Broeck Farm Inc. out of Washington state. She had been heavily immersed in stakes races since breaking her maiden by almost nine lengths in her first try at Gulfstream Park in Florida as a 2-year-old in May 2015. This dark bay filly immediately impressed by winning her first effort against stakes horses in the $250,000 Astoria B Stakes at Belmont Park under jockey Joel Rosario.

This was her second stakes victory, but had not won in stakes company in her last five efforts in New York, Kentucky, Maryland and California. It was the first time Geroux had been in the saddle for this horse but they clicked like a timely watch.

Moment is Right pushed her record to three wins in nine tries with another two runner-up efforts. She was bred in Kentucky by Woodford Thoroughbreds. The filly earned $30,000 for her efforts bumping her career stats to $220,945 in earnings for Ten Broeck Farm, Inc.

Cool Arrow Wins Kip Deville Stakes
If you haven’t heard much about the stallion Into Mischief, you might want to start paying attention. His 2-year-old progeny Practical Joke won the Grade 1 Hopeful Stakes this summer at Saratoga in upstate New York and now he has thrown another easy winner in a stakes race at Remington Park – the $75,000 Kip Deville Stakes – as Cool Arrow left his rivals behind like they were stuck in mud.

Cool Arrow gave jockey Joel Rosario his second stakes win of the night on Oklahoma Derby Day. The 2-year-old bay son of Into Mischief from the Mr Purple mare Phoenicia has now won two races in a row by daylight measure, effortlessly. He broke his maiden at Laurel on July 15 for trainer Joe Sharp, who said his wife and formerly the top female rider in the country Rosie Napravnak who is doing great in retirement as she enjoys time with her infant child.

Brad Grady of Covington, Texas, is the owner of Cool Arrow, he wouldn’t say where Cool Arrow’s next start would be.

“I just want to thank Joe Sharp for doing wonders with this horse for me,” said Rosario, who earlier won the Remington Green on the undercard. “Joe made it easy for me.”

Sharp said there were no doubts in their minds about this horse even though Cool Arrow took three tries to break his maiden and finally had to drop to maiden claimers to do it.
“We liked him from Day 1,” said Sharp. “He had a bit of a breathing issue, so we took him in for the surgery and now we’ve been rewarded with this fantastic horse.”

Cool Arrow improved to two wins from four starts with his first stakes victory. He earned $45,000 for the win and now has earned $74,935. Cool Arrow was bred in Kentucky by Allen Poindexter.

The Kip Deville Stakes is named in honor of the top earning Oklahoma-bred of all time. Kip Deville broke his maiden at first asking at Remington Park in November 2005. He went on to win multiple stakes races including the Breeders’ Cup Mile in 2007.

The Kip Deville Stakes is the first of three main stakes races for 2-year-olds at Remington Park. The $100,000 Clever Trevor Stakes is next in November, followed by the $300,000 Springboard Mile in December.

Taghleeb Rallies to Victory in Remington Green Stakes
Some of the top jockeys in the country on a regular basis converged on Remington Park in Oklahoma City on Sunday and the cream rose to the top in this race at 1-1/8th miles on the turf. Joel Rosario, who won the richest race in the world aboard Animal Kingdom and then won the 2013 Kentucky Derby in the same year with Orb, took the mount aboard Taghleeb in the $100,000 Remington Green and rode the perfect race for the stakes victory.

He let the other horses chip away at each other in the early going as he sat well back of the pack. At the quarter pole, saving every step of ground, he let out a notch on Taghleeb and he hunted the leaders down one by one until his head hit the wire first in this grass race. It wasn’t Rosario’s first stakes win at Remington Park, however. He had won the Oklahoma Derby in 2010 aboard Pleasant Prince for trainer Wesley Ward. This time he did the trick for trainer Michael Maker, a conditioner always in the running for top 10 nationally.

“I tucked him in early, and then saved some ground,” said Rosario. “I didn’t think we’d be that far back so I was trying to figure out what he wanted to do.”

What he wanted to do was win and he showed that as he hit his stride on the rail in this grass race and ate it up like a lawnmower.

The early money showed on this contender as he dropped down to 7-5 odds at first flash before he moved back up to 7-2 by post-time. Taghleeb paid $9.40, $3.40, $2.80 to win, place and show. Running second was the 4-5 favorite Pumpkin Rumble, who was only beaten three lengths in the recent Grade 1 $1 million Arlington Million race, always the top grass race in the country during the summer.