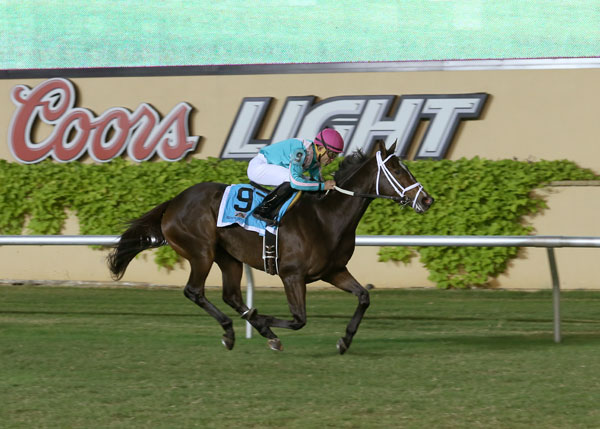 When jockey Joel Rosario gets a leg up on a horse anywhere nationally or internationally, he draws the respect of every crowd for which he performs. He wins in Dubai with Animal Kingdom in the richest race in the world in 2013 and then follows that up with a win aboard Orb in the 2013 Kentucky Derby. So when his plane set down in Oklahoma City on Sunday to ride in five of the races on Oklahoma Derby Day, he didn’t disappoint.

Rosario had already won two stakes races on the 10-stakes card when the final race of the night rolled around – the $50,000 Bob Barry Memorial Stakes, a 7-1/2 furlongs turf race for Oklahoma-breds. Rosario had the mount on 3-5 odds-on favorite Gianna’s Dream and by the end of the race, he had not only won his third stakes race of the night, but he had actually moved into ninth place in the Remington Park jockey standings for season earnings. All in a day’s work.

Gianna’s Dream finished four lengths ahead of runner-up, 65-1 longshot Miss Oreo. Another head behind was Lingering Smoke. A 3-year-old filly by Twirling Candy, conditioned by national trainer Michael Maker, Gianna’s Dream stopped the clock in 1:29.31 over the firm turf and paid $3.40 to win, $2.60 to place and $2.20 to show. The huge longshot Miss Oreo returned $33 to place and $14.60 to show. Lingering Smoke was worth $3.40 on a show ticket.

Owned by Jordan Wycoff of Fort Washington, Pa., Gianna’s Dream improved her record to three wins in four tries and banked another $30,000 for the win, giving her $135,158 lifetime. She is bred in Oklahoma by Center Hills Farm & Randy Blair and is out of the Rahy mare Untamed Beauty.