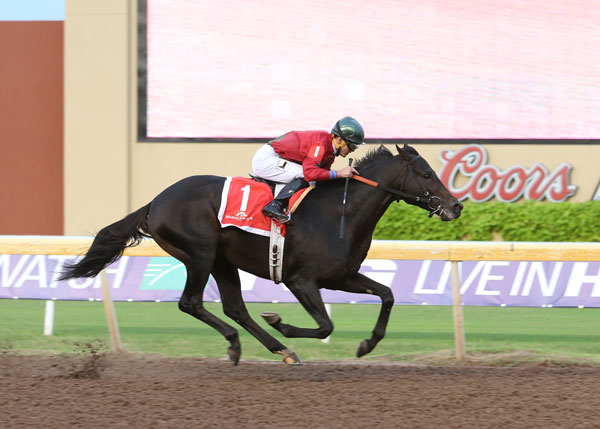 Chocopolgie’s sire, Candy Ride (Arg), retired undefeated with six wins in six tries, including a victory in the Grade 1 Pacific Classic at Del Mar. Candy Ride was forced to retire early because of injuries. His 4-year-old dark bay son, who won the $175,000 Governor’s Cup on Sunday at Remington Park, apparently inherited his daddy’s side of injuries, and success.

For the fifth time in 10 career starts, Chocopologie had his picture taken and he wasn’t even breathing hard after drawing off to a five-length win. It was the seventh time in a row this horse has run no worse than second, winning four times in that run, so one might think he was the favorite, right? Guess again. Those who had faith in his bloodlines and ability were rewarded with 9-1 odds and a payout of $21.20 to win, $6.40 to place and $4.60 to show.

Chocopologie ran a beaten second in the Grade 2, $400,000 Super Derby at Louisiana Downs in 2015 to Mobile Bay who was also in the field at Remington Park Sunday.

“We evened the score,” said Devereux, “and that’s OK.”

The odd thing about this horse is that as successful as he has been, this was the fourth race in a row he has had a different jockey. However, the last time Colby Hernandez was on his back he won by seven lengths, the same picture that showed up at Remington Park. The reunion was a joyous one as Hernandez put his mount through an opening near the rail at the top of the stretch in order to succeed.

“My dad taught me a lot,” said Hernandez, who is the son of Brian Hernandez. “And this horse will run through anything. We didn’t have much room and he just put his head down and went. I had plenty of horse left.”

Chocopologie is owned by Preston Stables of Paris, Texas and earned $105,000 to pad his career bankroll. He now has $267,525 with 10 starts, 5 wins, 3 seconds and 2 thirds. He is out of the Mineshaft mare Highest Class and was bred in Louisiana by Coteau Grove Farms.