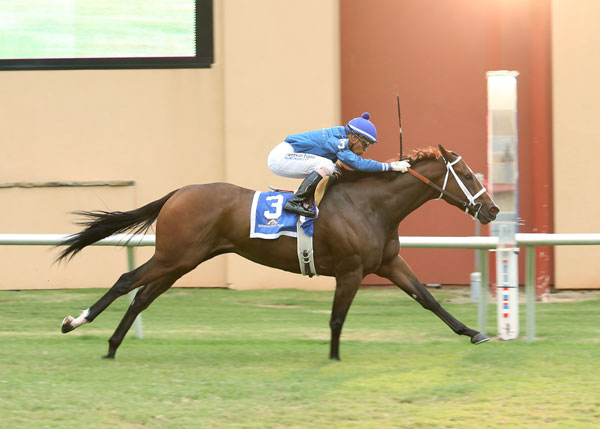 Ibaka, the former Oklahoma City Thunder basketball player had to go to Orlando as he was traded during the NBA off-season. However, Ibaka the racehorse manages to stay and win, taking the $50,000 Red Earth Stakes under leading rider at Remington Park, C.J. McMahon.

As they came running up to the 2-5 favorite down the lane, Ibaka left the field behind like kid brothers at a family picnic in a footrace, shaking them off to win going away in the 7-1/2 furlongs on the grass for Oklahoma-breds, 3-year-olds and up. The Red Earth was one of 10 stakes on the Oklahoma Derby card on Sunday.

It was the fifth time Ibaka had taken to the turf and the fifth time he has come out victorious, winning four of those at Remington Park. Running time for the winner was 1:28.86.

Ibaka, a 5-year-old gelded son of Texas stallion Uncle Abbie from the With Approval mare Synersis, is trained by Bret Calhoun, who conditions this runner for owner and breeder Doug Wall of Norman, Okla.

The winning margin was just over two lengths. Belen Quinonez, a master of hitting the board with longshot horses, ran second aboard 33-1 horse Runandyrun. That exacta was worth $40.20. The trifecta with Tenspeed third at 5-1 odds returned $70.70 on a $1 play. The $1 superfecta with Royal Lion in the fourth spot was $241.90 for $1.

Ibaka withstood an early speed duel, shaking off longshot Valentine Party after a half mile and then gave it everything he had to hold off his followers the other half of the race.