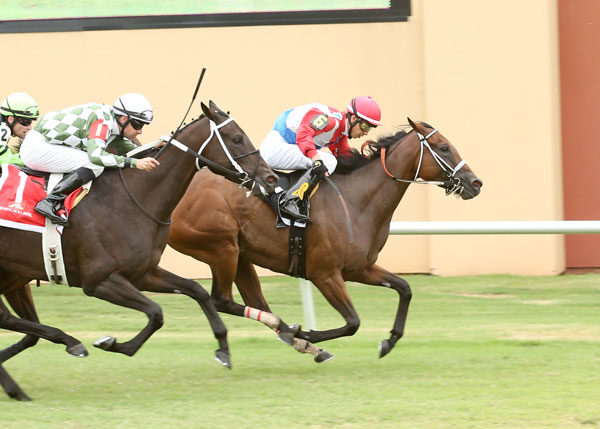 The smallest filly in the field started the night of 10 stakes races on Oklahoma Derby Day at Remington Park with the biggest shocker. Penguini, the only filly or mare in the field of six who weighed less than 1,000 pounds, came from off the pace at 24-1 odds to pull off the upset in the $75,000 Ricks Memorial Stakes. It was the second race of the night and the first of 10 stakes that includes the $200,000 Remington Oaks and the $400,000 Oklahoma Derby.

Jockey Geovanni Franco held this 4-year-old Oklahoma-bred daughter of Omega Code near the rear of this compact bunch and made his move at the quarter pole with his sights set on early sole leader in the race Stormquility. As 2-1 second choice Emerald Pond came up to the front-runner on the outside of Stormquility, Franco dived to the rail aboard Penguini and with a burst of speed got past both of them for the victory.

It was a family affair when it came to pocketing the purse as trainer Clinton Stuart took his part and owner/breeder Georgie Clinton of Edmond, Okla., his wife, took hers.

Penguini won for the first time among stakes company as her two previous starts against the likes of these found her finishing eighth going a mile in the slop at Remington Park and then ninth in the $50,000 Jersey Lily Stakes at Sam Houston Race Park in February in her first try on the turf against stakes horses.

She returned $51.20, $13.60 and $8 across the board to her backers and was followed in second and third by Emerald Pond and Stormquility, respectively.

The 3-5 favorite, Ghost Locket, the winner of this race last year, finished off the board, after fading at the top of the stretch.

Stuart recorded his eighth victory in only 32 tries at this meet, putting him in a tie for eighth place in the trainer standings.