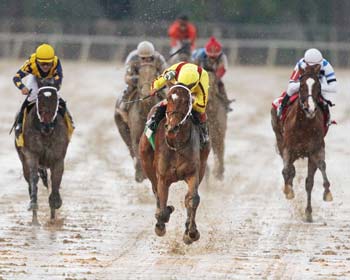 Trainer Steve Asmussen had the exacta in Saturday’s $200,000 Honeybee Stakes (G3) at Oaklawn Park, but it wasn’t the way the betting public had predicted with Stonestreet Stables’ Terra Promessa, the 4-1 second choice, running away from 4-5 favorite Nickname to win by 6 ½ lengths over a muddy track.

Terra Promessa settled into fourth place while Cosmic Evolution set the early pace with Nickname in close pursuit. The top duo maintained their position through fractions of :23 1/5, :47 and 1:12 4/5 for the first six furlongs, but proved no match for the winner, who took over at the top of the stretch and never looked back. The final time was 1:47 for 1 1/16 miles over a muddy track.

“She’s a really nice filly,” said winning jockey Ricardo Santana Jr., who rode five winners on Saturday’s nine-race card. “She always tries when she runs. I’m highly confident with this filly when she runs. She relaxed nicely and when I asked her to run, she did. I can’t say enough great things about her.”

“The way the races have been playing the last few days, I think her natural style played very favorably for today,” said Asmussen. “I think Terra Promessa has benefited from being here. Horses that excel here – she’s found new life. She’s come along awfully nicely. Her being a Curlin filly makes it very special for myself. Having Curlin have another graded stakes winner is very exciting.”

Cosmic Evolution held third and was followed by Dorodansa, She’s a Booty and Marquee Miss.

The top four fillies all earned points towards eligibility for the $1 million Kentucky Oaks (G1) May 6 with Terra Promessa receiving 50 points, which places her fifth on the list of 14 potential starters. Nickname now has 36 points after receiving 20 points for second and is seventh on the list. Cosmic Evolution earned 10 points and is now 22nd and Dorodansa has seven points after also finishing third in the Martha Washington Stakes. She is ranked 25th. Martha Washington winner Marquee Miss is ranked 18th with 10 points. The final race to earn points for the Oaks at Oaklawn is the $400,000 Fantasy Stakes (G3) April 9.