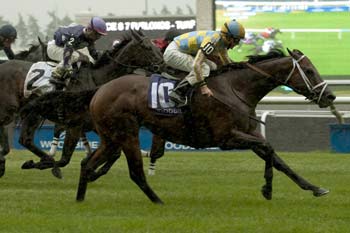 Lockout, a Grade 2-winning earner of more than $520,000, has been retired to stand his first season at stud at Caines Stallion Station in Wynnewood, Oklahoma. The son of millionaire and four-time graded stakes winner Limehouse will stand for a $1,000 fee.

Lockout hit the board in all three of his starts as a 2-year-old with runner-up finishes in two stakes, including the Grade 3 Grey Stakes on the synthetic surface at Woodbine in Canada. He broke his maiden on the dirt as a 3-year-old at Churchill Downs and later that season took the $125,000 Remington Green Stakes on the turf in Oklahoma City. He spent most of his remaining career in Canada, where he placed in two Grade 2 events and scored a victory in the Grade 2 Connaught Cup Stakes at Woodbine, all on the turf.

A winner on turf, dirt and synthetic, Lockout won from distances of seven furlongs to 1 1/16 miles and posted a 115 Beyer Speed Figure during his career. He retired with a record of 24-6-7-2.