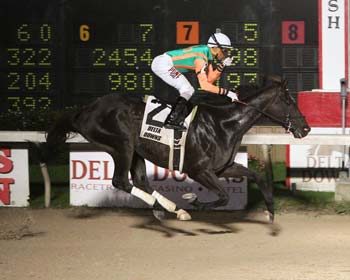 Delta Downs closed out its 2015-16 Thoroughbred season on Saturday night with an 11-race program that featured the fourth running of the $75,000 Borgata Stakes for older horses competing at one mile. The race was won by the Al Stall Jr. trainee Great Minds, who is owned by two-time Super Bowl champion Vince Wilfork.

Great Minds broke alertly from post position two under jockey C. J. McMahon before stalking the pace set by odds-on race favorite Teniente Coronel and Hazards of Love. When the field approached the top of the homestretch, McMahon swung his mount to the outside and took dead aim on the leaders. In the final furlong he wore down his rivals and hit the finish line 1-1/2 lengths clear of Fear the Cowboy who made a belated bid into second. Teniente Coronel faded late to finish third, another half-length behind the runner-up.

The final time for Great Minds over a fast racetrack was 1:38.77.

Great Minds is undefeated in two starts at Delta Downs as he also won an allowance race on February 5 before his Borgata triumph Saturday night. Overall he has won four of 18 starts and has earned a total $170,898. His more recent tally netted him a tidy sum of $45,000.

Great Minds is a 5-year-old gelding by Stroll, out of the Arch mare Staff Nurse. He was bred in Kentucky by Claiborne Farm.

Wilfork, a nose tackle who played his college football at the University of Miami, won two Super Bowls with the New England Patriots and played 11 seasons there after being drafted in the first round. The four-time NFL Pro Bowl selection signed with the Houston Texans last season. Wilfork started the Vince Wilfork Foundation to support diabetes research. For more information, go to vincewilfork75.com.