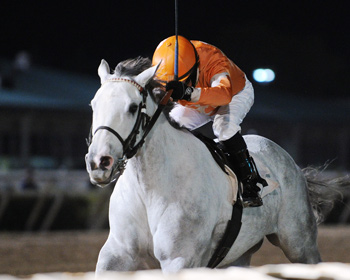 It was a blustery, chilly Friday night at Sam Houston Race Park, but the weather proved no obstacle for a trio of talented accredited Texas-bred fillies and mares. They put on a very entertaining show in the $50,000 Bara Lass for 3-year-old fillies; the $50,000 Yellow Rose for older fillies and mares and the 50,000 San Jacinto Stakes on the Connally Turf Course. Trainer Danele Durham took two of the three stakes with progeny of Texas stallion Too Much Bling owned and bred by Hall’s Family Trust.

Everything Bling Gets Her First Stakes Win in the $50,000 Yellow Rose Stakes
The first stakes of the evening was the $50,000 Yellow Rose Stakes and it was a very classy performance by Everything Bling, a 4-year-old daughter of Too Much Bling. Danele Durham trains the gray filly for Hall’s Family Trust and was pleased with her gate-to wire-effort tonight under jockey Glenn Corbett.

“All compliments to Lasting Bubbles; she’s a very nice mare and I was afraid we were going to have to run her down,” said Durham. “My filly was training well, was really fresh and I think she’s just coming into her own.”

“It’s just like having a kid in the Olympics,” said Lewis Hall of his homebred. “I’ve been so proud of these horses born in our backyard and come to the racetrack as champions. It’s been a wonderful experience.”

Everything Bling has won four of nine career starts with earnings of $120,539. She broke her maiden last year at Oaklawn Park and then scored allowance wins at Lone Star Park and Remington Park while also finishing second in the Valor Farm Stakes.

Everything Bling covered six furlongs in 1.11.17 and returned $5.80 as the second betting choice. Prada’s Bling, also by Too Much Bling, was third and Johnlouisclassical rallied to complete the superfecta.

Seneca Destiny in the $50,000 San Jacinto Stakes
Seneca Destiny was sent off as the 3-2 choice in the $50,000 San Jacinto Stakes and did not disappoint, closing gamely over the firm turf course under jockey DeShawn Parker. The 5-year-old daughter of Seneca Jones was bred by Keith Asmussen and is owned by Double Dip Stables. Trainer Brad Cox shipped her to Houston following successful efforts at Churchill Downs, Gulfstream Park, and most recently, a win at Fair Grounds. Cox did not make the trip to Sam Houston, but gave Parker the scoop on his mare’s preferred running style.

“He told me to just let her do her thing and lay off of them,” said Parker. “When she makes the lead too soon, she tends to play around and hang. I just tried to ride her with confidence, and she ran well. This is a beautiful turf course; I’ve always said that!”

Molly’s Honor set the early pace, covering the quarter-mile in :25.44 and the half-mile in :50.77. Parker sent his filly to the lead at the top of the stretch, finishing a length and one-half over Whiskey Eyes. The final time was 1:45.54.

Trainer Danele Durham enjoyed her status as the “Queen of Bling” with a second stakes win tonight by a daughter of Too Much Bling. Too Much Prada broke well under Glenn Corbett, and withstood a late bid from Indygo Rocket to capture the second stakes of her career.

The Hall’s Family Trust homebred won her debut at Lone Star and was impressive with a front-running score in the $75,000 Texas Stallion Stakes last September at Retama Park. Corbett was aboard when she ran ninth in the E L Gaylord Memorial Stakes at Remington Park on October 23, but had a game filly this evening.

“At Remington, she didn’t break well, and we got into traffic trouble,” said Corbett. “She turned it around tonight. I have to thank my connections; I really appreciate the opportunity to ride for Danele and Mr. Hall.”

Too Much Prada crossed the wire in 1.13.25 and returned $4.40 for the win. Indygo Rocket, trained by Danny Pish and ridden by David Cabrera, made a determined bid, but had to settle for second. Easter Ellie completed the trifecta followed by Vanilla.

“To win two stakes in one night and I have two more tomorrow,” said Hall. “I am just speechless!”