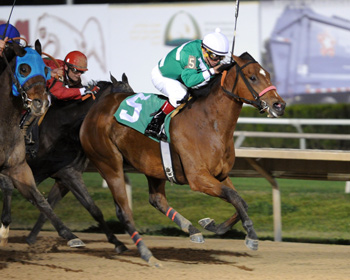 Texas Champions Weekend at Sam Houston Race Park concluded Saturday evening with four stakes for accredited-Texas-breds. There were standout performances in each of the featured races on a clear, cool evening.

David L. Davis’ homebred A M Milky Way, winner of the $50,000 Groovy Stakes last January at Sam Houston Race Park, was bet down to odds-on minutes before the load and did not disappoint. Trained by Karl Broberg, the son of Elusive Bluff was ready off a seven-month layoff, powering home in 1:10.22 under veteran rider Patrick Valenzuela.

Houston racing fans enjoyed Valenzuela when he rode here in the 2002 NTRA Great State Challenge, and he got a hearty round of applause in the winner’s circle.

“It’s a thrill to be back here and to ride for Karl Broberg,” said Valenzuela. “My horse ran a great race; opened up and no other horse was getting by me.”

Solar Charge, who won the 2012 edition of the race, closed strongly, finishing just a neck behind the winner. The 9-year-old, trained by Ellen Williams, was the runner-up last year responded nicely to rider David Cabrera this evening.

When Valenzuela was told that a 9-year-old horse was rallying at the wire, he quipped, “that’s okay; I’m a 53-year-old jockey!”

A M Milky Way, by Elusive Bluff, returned $3.60, winning his fifth career race and increasing his earnings to $191,275. Reflector ran third under Jamie Theriot and Nublado Bling was fourth.

Defending Champion F J Uncle Vic Lights up the Toteboard in the $50,000 Star of Texas
F J Uncle Vic, winner of the 2015 Star of Texas, got no respect at the betting windows, but showed tremendous value on the racetrack. The 5-year-old son of Uncle Abbie, ridden with confidence by Ernesto Valdez-Jiminez, came flying late, at odds of 22-1.

It was a very proud victory for owners Johnny B. Evans and Terry Eoff. Eoff trains F J Uncle Vic, who notched his fourth career win.

“He loves Sam Houston,” said Evans. ”This horse is so special to me; he’s named after my late Uncle Vic. Terry and Ernesto deserve all the credit. He’ll be back next year!”

Texas Bling, sent off as the betting favorite, was shuffled back, and finished fourth.

Bravura Tops Full Field in the $50,000 Groovy Stakes
Trainer Bret Calhoun has won the Groovy Stakes three times and made it four this evening with Victoria Ashford’s homebred Bravura. The Early Flyer colt won his prep for this last month at Delta Downs under C. J. McMahon, who made the trip to Sam Houston this evening for the six furlong Groovy.

“He’s been absolutely phenomenal from day one,” said McMahon, who rode the striking chestnut to his maiden-breaking win at Lone Star Park last June. “Now he’s maturing and figuring it all out.”

Ashford accepted the trophy and was very proud of her homebred, who drew off to a 1 ¼ length win in a final time of 1.11.69.

“I thought this was his best performance yet,” said Ashford. “But I have to hand it to Bret and his team as well as C.J. They’ve done an amazing job with him.”

Calhoun spoke about what it takes to develop a young racehorse into a stakes winner.

“You have to start with a lot of talent,” stated Calhoun. “This colt’s been nice from day one and ‘Tory’ has been very patient and let us take our time. He’s just getting better and better.”

Bravura paid $4.20 for the win, and Calhoun indicated that his charge would return for the Jim’s Orbit division of the Texas Stallion Stakes on February 20.

Rose Mary Chandler’s homebred I Am Jane Dough came from off the pace to win the $50,000 Tomball Distaff for accredited Texas-bred fillies and mares last February. The 5-year-old mare by My Golden Song could have run Friday night, but trainer Danny Pish opted to test her against the “boys” in the Richard King.

Pish told jockey Glenn Corbett that the mare had a solid closing kick, and true to form, she closed powerfully, passing several horses to win by a margin of 1 ¼ lengths. Her final time, over the firm Connally turf course, was 1:50.85.

“Danny told me in the paddock that she likes to come from off the pace; make that one run. Just let her settle and let her do her running at the end. She’s all class and finished really strong.”

“She made us look good,” said Pish. “She’s a heck of a race mare. I struggled with the decision to run her against males, but she made me look smart.”

“Those stretch runners, especially the ones that come from the clouds like that, can be nerve-wracking, but she knew what she was doing,” added Pish.

I Am Jane Dough was sent off at 5-1 and rewarded her backers with a win payout of $12.20. This was the fifth career win for the dark bay mare.