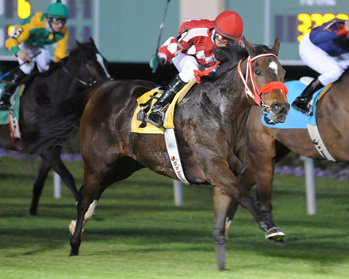 Sam Houston Race Park will salute accredited Texas-breds on Friday and Saturday night when they host Texas Champions Weekend. Seven stakes will be contested, with fillies and mares in action on Friday, January 22 and colts and geldings taking center stage Saturday night.

Judy Peek’s homebred daughter of Pulling Punches won the Yellow Rose in front-running fashion two years ago and ran second in last year’s stakes. Trained by Kevin Peek, the 8-year-old mare is still in very sharp form, with two stakes victories at Lone Star Park and a runner-up finish in the $100,000 Zia Distaff on November 25.

“She stumbled in her last stakes and that really impacted her performance,” said Kevin Peek. “She has been an amazing mare for our family; very pleasant in the barn, and always gives her all.”

Lasting Bubbles will be ridden again this year by Lindey Wade, and is the high earner in the field with $466,788 in 35 lifetime starts.

“She didn’t run early in her career,” explained Peek. “She was close to 17 hands at two, and needed time to develop. We have always taken a conservative approach with the mare; we weren’t sure she would run at eight, but she’s telling us she is ready.”

Lasting Bubbles will face her stiffest test from Valor Farm Stakes runner-up, Everything Bling, a 4-year-old daughter of Too Much Bling. Danele Durham trains the gray filly for Hall’s Family Trust and will give a leg up to jockey Glenn Corbett.

“She’s a fabulous filly, a full sister to Texas Bling,” said Durham. “Lasting Bubbles will be tough to beat, but Everything Bling is really coming into her own. We are looking forward to the weekend and are excited to be supporting Texas racing.”

The Yellow Rose will run as the eighth race on the card with an approximate post time of 10:26 p.m. (CT).

The 6-year-old mare is a daughter of Valid Expectations, owned and trained by Leroy J. Pollok. Regular rider Iram Diego returns and hopes to make one big, late run, as she did in last year’s edition of the turf stakes.

Expect Royalty has now won 9 of her 17 lifetime starts; six victories have been on the grass. She will face Seneca Destiny, a 5-year-old mare owned by Double Dip Stables and trained by Brad Cox. She will reunite with jockey DeShawn Parker, who rode her to a turf allowance win here on January 22.

Another filly to watch is Infectious, who won the 2015 Bara Lass for breeder and owner W. S. Farish. The dark bay daughter of Valid Expectations is trained by Danny Pish, who liked her closing kick in the Fiesta Mile at Retama Park last September.

“She finished well, running second to I Am Jane Dough in her last turf stakes,” said Pish. “I decided to run ‘Jane” Saturday night against the boys.”

$50,000 Bara Lass Stakes Closes Out Friday Night’s Stakes
A field of eight accredited Texas-bred fillies will compete six furlongs in the final race of the Friday card, the $50,000 Bara Lass.

Trainer Danele Durham might be honored as the “Queen of Bling” if her Too Much Bling filly Too Much Prada comes through as the 5-2 choice. The Hall’s Family Trust homebred won her debut at Lone Star and was impressive with a front-running score in the $75,000 Texas Stallion Stakes last September at Retama Park. Durham is confident she will rebound from her ninth-place finish in the E L Gaylord Memorial Stakes at Remington Park on October 23.

“She has been training fabulously (at Oaklawn Park),” said Durham.

Glenn Corbett will ride Too Much Prada, who will break from the rail. Trainer Danny Pish, who has won the Bara Lass three times, will saddle Indygo Rocket for owners Riley and Ronald Morgan. The chestnut daughter of Indygo Mountain ran third in the Texas Stallion Stakes, but won her prep for the Bara Lass last month at Delta Downs. She will be ridden by David Cabrera from post position seven.

Saturday Night Stakes Begin with the $50,000 Spirit of Texas
Several respected veteran sprinters will compete in the six furlong $50,000 Spirit of Texas Stakes. David L. Davis’ homebred A M Milky Way, winner of the $50,000 Groovy Stakes last January at Sam Houston Race Park, leads the field. Trainer Karl Broberg, who is off to a great start in the 2016 Sam Houston meet, brings back his gelding off a seven-month layoff. His last race was a seventh-place finish in the Grade 3 CarryBack Stakes at Gulfstream Park in July. Broberg has tabbed veteran rider Patrick Valenzuela to ride the 4-year-old son of Elusive Bluff. Houston racing fans enjoyed Valenzuela when he rode here in the 2002 NTRA Great State Challenge.

His competition will include Circustown Flyer, who was a runner-up in the 2014 Groovy Stakes for owner Ox Creek Farms, Inc. The 5-year-old son of Early Flyer is trained by Bret Calhoun and has posted three nice works for his 2016 debut. Louisiana-based jockey C. J. McMahon has the call. Carolyn Barnett’s homebred Solar Charge will make his 66th career start in the Spirit of Texas. The 9-year-old, trained by Ellen Williams, won the 2013 edition of the stakes and has surpassed the $500,000 earnings mark. David Cabrera will guide the bay gelding on Saturday night.

Defending Champion F J Uncle Vic Returns in the $50,000 Star of Texas
A very competitive field is entered in the one-mile $50,000 Star of Texas.  Last year’s champion, F J Uncle Vic, closed in the final stride to win by a half-length. The 5-year-old son of Uncle Abbie, will once again, be ridden by Ernesto Valdez-Jiminez piloted the bay colt for owners Johnny B. Evans and Terry Eoff. Eoff trains F J Uncle Vic, who will be looking for his fourth career win.

Too Much Bling, at odds of 9-5, will make his Sam Houston Race Park debut for Hall ‘s Family Trust and trainer Danele Durham. The 6-year-old son of Too Much Bling was a huge upset winner in the Springboard Mile at Remington Park and then ran second in the Smarty Jones at Oaklawn Park.

“He had tremendous success as a 3-year-old,” said Durham, who will give a leg up to rider Glenn Corbett. “He was back-to-back winner of the Assault Stakes (at Lone Star Park) and we are excited to bring him back to Texas.”

2014 Star of Texas champion, Paul Rigali, Jr.’s Texas Air, returns and will be ridden by Cabrera. The 8-year-old son of Texas City is trained by Allen Milligan, for owner Paul Rigali, Jr. The field also includes Supermason, owned by Brad Grady and trainer by Bret Calhoun as well as 2015 Spirit of Texas Stakes victor, Edplicit.

Field of Ten Entered in the $50,000 Groovy Stakes
Owner David Davis and trainer Karl Broberg won last year’s Groovy Stakes with A M Milky Way and have another talented 3-year-old, Taylors Angiel, running Saturday night. The son of Broken Vow broke his maiden at first asking at Delta Downs on November 13 and won the $50,000 Sugar Bowl Stakes last month at Fair Grounds. Installed as the 3-1 favorite, he will break from post position six under Valenzuela.

“I have great help and keep a lot of notebooks,” said Broberg on managing his stable.

Trainer Bret Calhoun has won the Groovy Stakes three times and will saddle Victoria Ashford’s homebred Bravura. The Early Flyer colt won his prep for this last month at Delta Downs under C. J. McMahon, who will break from post position seven. Two runners from the Danny Pish barn, Silver Doddge, who has won his last two for owner Danny Keene and Break Free, owned and bred by Will Farish, merit consideration.

Rose Mary Chandler’s homebred, I Am Jane Dough, came from off the pace to win the $50,000 Tomball Distaff for accredited Texas-bred fillies and mares last February. The 5-year-old mare could have run Friday night, but trainer Danny Pish opted to test her against the “boys” in the Richard King. She will be ridden by Glenn Corbett as the 3-1 morning-line choice.

“She has shown she loves to route and we liked the idea of not running her against Infectious,” stated Pish of the Texas-bred mare.

Special UFO and Ring Necked, are two of the other contenders in the nine-horse field.