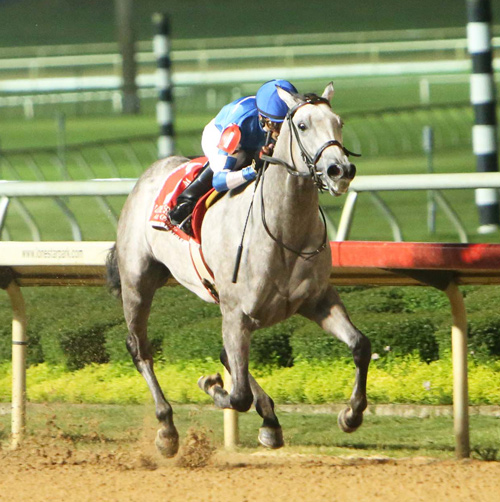 Progeny of Texas stallion Too Much Bling took both divisions of the Texas Thoroughbred Futurity on Saturday that comprised Stars of Texas Day at Lone Star Park.

In the $93,903 fillies division, Texas-bred Bling On the Music rolled to an easy 8 ½-length win as the evey money favorite. Luis Quinonez rode for trainer J.R. Caldwell and owner Keene Thoroughbreds LLC (Danny Keene). The $95,000 sale-topper from the Texas 2-Year-Olds in Training Sale, who was bred by W.S. Farish and consigned at the sale by Asmussen Horse Center, won for the second time in as many starts and improved her earnings to $68,882.

Gold Shock, a daughter of My Golden Song, finished second with Colonial Kendra, by Intimidator, in third.

The $90,248 colts and geldings division also went to a W.S. Farish-bred runner by Too Much Bling, as Shaded won the race via disqualification. Boomer’s Boy, a son of Eaton’s Gift, crossed the wire first but was placed fifth for interference. Shaded runs for Clark Brewster and is trained by Steve Asmussen. The colt sold for $36,000 at the Texas sale from the consignment of Asmussen Horse Center. Shaded, who was ridden by Iram Diego for trainer Steve Asmussen, has earned $66,449 with two wins in two starts.

The $50,000 Valor Farm Stakes was won by, appropriately enough, a daughter of former Valor Farm stallion Silver City in Promise Me Silver. Bred and owned by Robert and Myrna Luttrell, last year’s Texas Champion 3-Year-Old Filly and 2014’s Champion 2-Year-Old Filly picked up her 10th win in 13 starts. The Grade 3 winner, who is trained by Bret Calhoun and was ridden by C.J. McMahon, has earned nearly $500,000. Promise Me Silver won by seven lengths as the 1-5 favorite.

Valid Bride got up for second with Everything Bling in third.

The $50,000 Assault Stakes went to Supermason, who gave W.S. Farish a third stakes win as a breeder, with this one bred in partnership with the E.J. Hudson Jr. Irrevocable Trust. Ridden by C.J. McMahon and trained by Bret Calhoun for owner Brad Grady, Supermason earned his second stakes win at the meet after taking the Premiere Stakes on opening night. The son of Grasshopper has earnings of $231,615.

Spider’s Alibi came from last to get second and was followed by Texas Air in third.