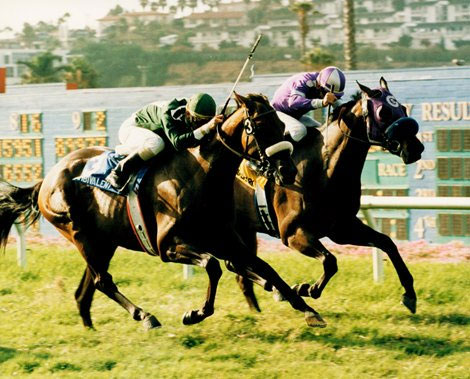 The Barking Shark, a gallant gelding who competed with many of the best horses of his generation in the late 1990s and earned $572,366, recently lost a battle with colic. By the time of his death, The Barking Shark had enjoyed almost 14 years of retirement at Glen Ellen Vocational Academy (GEVA), Inc. in Glen Ellen, California.

A fan favorite due in part to his unique name, The Barking Shark did most of his running in California but also had ties to the Southwest, as he raced in Arizona and New Mexico (where he won the Ruidoso Horse Sales Futurity at Sunland Park). His sire, Naevus, moved to Texas shortly after siring The Barking Shark and was a leading stallion in the state for many years.

Born on April 7, 1993, The Barking Shark was a son of the multiple graded-stakes placed Mr. Prospector stallion Naevus and an unraced Vice Regent mare, Sweet Augusta. He was bred by Jayeff “B” Stables in Kentucky.

A minor stakes winner at Turf Paradise at 3, The Barking Shark’s career took off when Marcelo Polanco claimed him in July of his 3-year-old season. That fall, the front-running gelding ran consecutive close seconds as he continued to climb up the class ladder in the $80,825 Oceanside Stakes, $132,850 La Jolla Handicap (G3), and the $300,000 Del Mar Invitational Derby (G2), all at Del Mar Race Course.

In The Barking Shark’s 4-year-old debut, he ran another strong second, this time in the $500,000 Strub Stakes (G1) at Santa Anita to Dwyer Stakes (G2), Swaps Stakes (G2), and Lazaro S. Barrera Handicap (G3) winner Victory Speech, an earner of almost $1.3 million. With his runner-up finish, he avenged his loss to Editor’s Note in the Super Derby the previous fall by finishing in front of that foe, as well as several other notable stakes performers.

The Barking Shark eventually ended up back in the claiming ranks from which he had risen to prominence. He fractured a cannon bone at one point and was away from the races for over 18 months before returning to toil the rigors of the claiming ranks.

The Barking Shark went out a winner at the age of 10, taking a 5 ½-furlong claiming race at Bay Meadows on February 9, 2003 by 2 ¼ lengths and earning a 98 Beyer Speed Figure. He was purchased prior to his next scheduled race by a group of concerned California horsemen and women who wanted to see the gallant gelding retire sound and enjoy a well-earned retirement. The group retired him immediately to GEVA, Inc., where he happily lived out the remainder of his life with his mares, Foggy and Luvy.