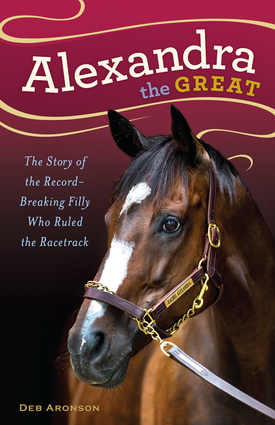 A new book for young readers chronicling the story of Rachel Alexandra is set to be released March 1. Written by Deb Aronson and published by the Chicago Review Press, the book is entitled Alexandra the Great: The Record-Breaking Filly Who Ruled the Racetrack.

The book includes numerous connections to Texas, as Rachel Alexandra received her early training at Diamond D Ranch in Lone Oak. On the track, she was first trained by Hal Wiggins, a past president and current board member of the Texas Thoroughbred Association, and then by Steve Asmussen.

Following is the overview from the publisher:

When a little foal with a white upside-down exclamation point on her forehead was born one morning in Kentucky, the heart of America’s horse racing region, problems mounted quickly. Rejected by her mother, the filly would need to be accepted and nursed by another mare. As she grew, the tall, knock-kneed girl remained skinny and scruffy, with paltry muscles. Considered an “ugly duckling,” she was unsuitable as a champion racehorse, her owner proclaimed, and must be sold. But two days before the sale, an examination revealed a medical condition—now she was impossible to sell! What would become of this problem filly?

Alexandra the Great tells one of the greatest underdog tales in American sports—the story of Rachel Alexandra, who grew up to become one of the most remarkable racehorses in history. Despite dominating every filly her age, her owner refused to let her compete against male horses. When a new owner saw her potential and raced her against bigger, stronger males, Rachel Alexandra thrived and went on to win the Preakness, the first filly to do so in 85 years, and the Woodward, a feat never before achieved by a filly. Having grown into a strong, muscular, dominating athlete, Rachel Alexandra was named 2009 Horse of the Year, broke records, graced the pages of Vogue magazine, and showed people around the world exactly what it means to “run like a girl.” Including vivid details gleaned from interviews with Rachel Alexandra’s owners, veterinarian, beloved jockey Calvin Borel, and more, Alexandra the Great gives readers an exciting and emotional look at both the humans and horses who pour their hearts and souls into the world of Thoroughbred training and racing.

For more information or to purchase a copy, click here.