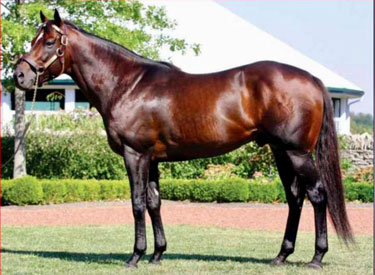 Adding to the already significant list of stallions coming into Texas for the 2017 breeding season, a new farm has entered the Thoroughbred domain as Ivy Rose Equestrian Center in Cameron will stand race-bred stallions for the first time.

Owned by Melanie Teal and co-managed by her mother, Mary Ellen, Ivy Rose is new to the racing business but not to the horse business.

“We have been in the horse industry for 30-plus years, and it’s been a lifelong endeavor,” Teal said. “I’ve done competition, rehabilitation, foaling, raising and training, and I’ve had Thoroughbreds before but never for the racing industry.”

Teal and her mother said they became interested in the Thoroughbred racing market after seeing the versatility of the breed, and they hope their connections and experience in the sporthorse world will allow for some crossover between the two disciplines. They would like to get sport horse enthusiasts interested in racing, while also introducing racing horsemen to some of the other pursuits Thoroughbreds can excel at, which in turn can help find a new home or career for a racehorse after his time on the track.

“The racing industry seemed like a good opportunity and one that has room to grow again in Texas, so we think it’s an ideal time to get into it,” Teal added. “The Thoroughbred is amazingly versatile, so we think an operation like this can serve both the sporthorse and the racing markets.”

The mother-daughter team is not afraid to admit that they still have things to learn about the racing side of the business, but they have worked with trainer Kris Fullerton and are excited to become more involved in racing.

As for the 2017 stallion roster at Ivy Rose, the headliner is multiple graded stakes winner Spellbinder, who comes to Texas from Florida. The 16-year-old stallion’s leading progeny includes Well Spelled, an earner of $364,160 who won the $100,000 Jersey Shore Stakes (G3) at Monmouth Park and the $300,000 Gallant Bob Stakes at Parx Racing. Spellbinder, by Grade 2 winner and Grade 1-placed Tale of the Cat, earned $499,057 while winning six of 29 starts. Racing almost exclusively in California, Spellbinder won the San Antonio Handicap (G2) at Santa Anita Park and the Berkeley Handicap (G3) at Golden Gate Fields. He also placed in three other graded events. Spellbinder is out of the Quiet American mare Thorough Fair, who also produced Breeders’ Cup Juvenile (G1) winner and sire Whywhywhy.

Ivy Rose’s remaining stallion roster features some strong pedigrees. Class Warfare is by Horse of the Year A.P. Indy out of millionaire and Grade 1 winner Take D’ Tour; Real Quiet Cat is a son of Kentucky Derby (G1) and Preakness Stakes (G1) winner Real Quiet out of a winning Storm Cat daughter; and Bug a Boo Ben is a son of Awesome Again out of the Grade 1-winning Dynaformer mare Collect the Cash.

“We are very excited to be a part of the Thoroughbred racing industry,” Teal said, “and we look forward to meeting more people in the industry in the coming months and years.”