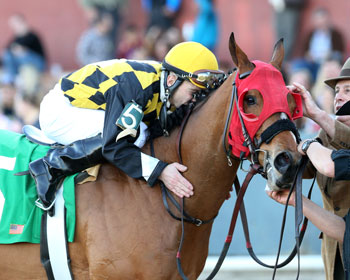 Three horses, each for $25,000, were claimed out of the ninth race March 6, 2014, at Oaklawn. However, only one of those horses has developed into a multiple stakes winner.

“Just glad he found us, you know what I mean?” trainer Tom Howard of Hot Springs said of Ivan Fallunovalot. And, Howard didn’t even have to shake for the gelding, now 7, either.

Unlike the other two horses, who have never started in a stakes race since being claimed out of that March race, Ivan Fallunovalot has flourished in high-end races under the care of Howard and owner Lewis Mathews, a businessman in nearby Bismarck, Ark.

Ivan Fallunovalot, a son of Valid Expectations bred by Eileen Hartis, has won 11 races – seven stakes and four in allowance or allowance/optional claiming company – competed in the $1.5 million Breeders’ Cup Sprint (G1) in October 2015 at Keeneland and was named 2015 Texas Horse of the Year and 2016 Texas Champion Older Horse by the Texas Thoroughbred Association. He finished ninth in the Sprint (beaten 6 ½ lengths by the freakish Runhappy), but hasn’t lost since.

What was supposed to be a claim based heavy on regional flavor – Mathews was shopping for a Texas-bred because Howard was shifting his summer base from Prairie Meadows to Lone Star Park in 2014 – has turned into the claim of a lifetime and among the best in Oaklawn history.

“I’m just proud to be a part of it,” Mathews said.

Mathews, who has 60 victories solely or in partnership since his first in 2004, said he handicaps every night before the races and looks for lightly raced horses with the “potential to win” in making claims. Ivan Fallunovalot, he said, was a perfect fit.

“At that time, I think he had eight outs and three wins and earnings of $60,000,” Mathews said. “He hadn’t been heavily raced and showed the potential to win. And, then I liked Valid Expectations. Knowing that we were going to Texas, it all came together.”

The “irony,” Mathews said, is Ivan Fallunovalot has started only once in Texas since being claimed (an allowance/optional claiming victory in May 2015 at Lone Star).

“They didn’t have a non-winners of 12 or anything like that,” Mathews said with a laugh.

The March 2014 race at Oaklawn was Ivan Fallunovalot’s 4-year-old debut, first start outside Texas and first running for a claiming price.

“He jumped off the page, so I called Tom and said since we’re going to Texas, let’s take a look at this one,” Mathews said. “And the way we do it is, we both look at it physically before we make the decision. This time, a lot of luck was involved.”

Howard said he believed Ivan Fallunovalot, who began his career with the high-profile Texas connections of owner Tom Durant and trainer Jack Bruner, shipped in the day before the race and vividly recalls the gelding’s “slick” coat.

“I guess he had been in Texas, because he didn’t look like the other horses that were here,” Howard said. “We had hair. I mean, it was a rough winter. I looked at him and said, ‘He looks damn good to me.’ ”

Save a foot problem (the gelding spent approximately 60 days at Mathews’ farm following the 2016 Oaklawn meeting recovering from a quarter-crack), Ivan Fallunovalot hasn’t had any major physical problems since being claimed. Mathews said his goal for Ivan Fallunovalot is to reach $1 million in career earnings and retire sound to his future home in Bismarck.

“You will never, ever see him in a claiming race,” Mathews said. “When it’s time, I’ve already got a place for him here.”