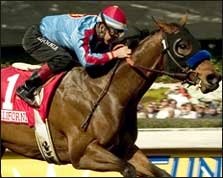 Da Stoops, a multiple stakes-winning son of Distorted Humor, will stand the 2017 breeding season at Rockin BB Ranch in Tecumseh outside of Oklahoma City. The 14-year-old stallion will stand for $1,000 as property of Danny Caldwell, a perennial leading owner at Oaklawn, Remington Park and Prairie Meadows.

Da Stoops earned $640,906 with a career record of 16-5-5-4 that included four stakes wins. While known primarily as a sprinter with three of his stakes wins coming at six or seven furlongs, he also proved he could go a distance of ground with a 5 ¼-length win in the $250,000 Cal National Snow Chief Stakes at 1 1/8 miles at Hollywood Park. He also placed in the Grade 3 Hollywood Prevue Stakes at Hollywood and Grade 3 Dwyer Stakes at Belmont Park, and he ran fourth in the Grade 1 Malibu Stakes at Santa Anita.

As a stallion, Da Stoops has sired the earners of more than $4.2 million, topped by multiple stakes winner and $218,720 earner Redneck Humor.

“I owned a horse by Da Stoops named Da Belldozer who later went on to place in a couple of stakes, so that’s part of what attracted me to him,” said Caldwell. “Da Stoops could run 1:08 and change, he could also stretch out, and he ran well at an early age. We usually breed for speed in Oklahoma, so he’s an excellent fit and I think he’s going to be a good cross with a lot of mares here.”