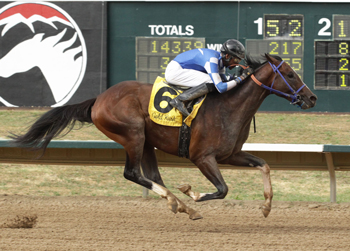 The entry of Texas Chrome in the 2016 Breeders’ Cup Dirt Mile (G1) could make the 3-year-old bay colt only the second horse that has raced in Colorado to go on to compete in the Breeders’ Cup World Championships. The winner of the 2015 Gold Rush Futurity, Arapahoe Park’s richest race for Thoroughbreds, was entered in the $1 million race  to be run on Friday, November 4, at Santa Anita in California during horse racing’s richest event of the year in the United States.

Chips All In, who captured the 2011 Gold Rush Futurity and ran in the 2013 Breeders’ Cup Turf Sprint, was the first horse to go from racing in Colorado to the Breeders’ Cup.

The Texas-bred son of Texas stallion Grasshopper also carries the hopes of the Lone Star State, as he sold at the Texas Summer Yearling Sale at Lone Star Park and then returned to the Dallas-area track to begin his racing career. He will also represent Oklahoma as the winner of the Grade 3 Oklahoma Derby and as a Remington Park based horse for trainer J.R. Caldwell and owner Danny Keene.

Like Breeders’ Cup Classic favorite and 2014 Kentucky Derby winner California Chrome, who subsequently inspired the state-plus-chrome formula for naming racehorses, Texas Chrome began his racing career with modest expectations as a $10,000 yearling purchase by Danny Keene’s Keene Thoroughbreds at the October 2014 Texas yearling sale. Following victories in a maiden race and the Texas Thoroughbred Association Sales Futurity at Lone Star Park, Texas Chrome’s first venture outside the Lone Star State where he was foaled was a 2 1/2-length victory in the six-furlong, $100,000 Gold Rush Futurity at Arapahoe Park on August 16, 2015.

“He’s just learning how to run,” Deshawn Parker, his jockey in Colorado, said after that race. “Going longer, he’ll be alright.”

Parker’s words have proven to be prophetic as Texas Chrome has continued to blossom as a 3-year-old and while racing over longer distances. Texas Chrome and jockey C.J. McMahon will enter the Breeders’ Cup Dirt Mile on a three-race win streak following victories in the $100,000 Super Derby Prelude and $500,000 Super Derby (G3) at Louisiana Downs and the $400,000 Oklahoma Derby at Remington Park. Texas Chrome’s grit in squeezing through a tight opening on the rail during a furious stretch duel in the Oklahoma Derby drew praise from racing pundits and prompted his connections to give the $10,000 colt who has gone on to earn $842,462 a shot on horse racing’s biggest stage.

“There’s nothing any person has ever done in his career to make that horse do what he did in that situation,” Texas Chrome’s trainer, J.R. Caldwell, said in a profile of the horse in Thoroughbred Daily News by Joe Bianca. “It’s just amazing. He’d given it all he had to get to that point, and to be able to dig down and find more to get him past and get the win, it’s awesome for racing because you live for those moments.”