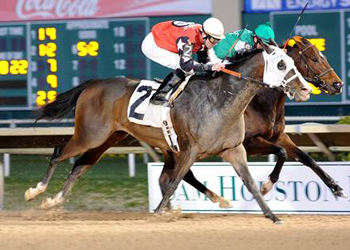 Berry and Calhoun have teamed up to win the last two editions of the Groovy; last year with Worldventurer and in 2012 with Sword Trick.

Danny Keene’s Time Iz Flyin ran in both the Kip Deville and Clever Trevor Stakes at Remington Park for trainer Allen Milligan. The son of Early Flyer drew off to a six-length victory in the Texas Stallion Stakes at Retama Park last month and posted a bullet work at Sam Houston on January 7.

“We have had a lot of hope for him since the beginning,” said Milligan, who will have 30 horses running this meet at Sam Houston. “That was a great effort last month at Retama and Bryan was very pleased with his work over the Houston track.”

The son of Gold Legend settled off the pace, rallying under jockey Cliff Berry to take the six furlong feature in 1:09.93. He is a notable “horse for the course” with a record at Sam Houston of four wins from five starts.

“He ran against some tough company at Keeneland and Churchill,” said Calhoun of the defending champion. “He is always on his game in Houston.”

Solar Charge, who won the 2012 edition of the Spirit of Texas Stakes, and ran second last year, cannot be overlooked. The 7-year-old gelding was claimed at Remington Park by Carolyn Barnett and David and Lana Alford and is trained by Ellen Williams. The highest money earner in the field with a career bankroll of $361,609, will break from the outside post under jockey Glen Murphy.

$50,000 Star of Texas
Allen Milligan will saddle Texas Air, a capable veteran, for owner/breeder Paul Rigali, Jr. This will be the first start at Sam Houston for Texas Air, who won an allowance last month at Retama Park under rider Dakota Wood.

“He’s a really nice horse,” said Milligan. “Maybe better on dirt than turf, but very sound. Dakota did a great job on him at Retama, so he will keep the mount. He’s facing some tough horses, but we feel he is ready.”

Trainer Danny Pish has two talented entrants in the $50,000 Star of Texas, a mile and one-sixteenth main track stakes. Special U F O is seeking his fifth consecutive win for owners Southwestern Racing LLC. The 4-year-old gelding began his winning streak last May at Lone Star Park and has won two main track routes and two turf races at Retama Park. Pish’s other contender is Safe Range, a son of Valid Expectations, bred and owned by the partnership of W. S. Farish, Hugh Fitzsimmons and E. J. Hudson. The accomplished Texas-bred is the high earner in the seven-horse field with $125,380 bankrolled in his 27 lifetime starts.

Last year jockey Glen Murphy slipped through an opening on the rail to win aboard Skip a Smile, the 2011 TTA Texas Horse of the Year. Murphy will have another strong contender on Saturday evening with Valid Message. The 8-year-old son of top Texas sire, Valid Expectations, owned by Patricia Blackmon, will be making his 59th career start and shows no signs of slowing down with seven turf wins in 2013.

“He’s a really fun horse to ride,” said Murphy of the veteran turf specialist, trained by Karl Broberg. “I am really excited to see him entered in the Richard King.”

Broberg will also saddle Fly The Red Eye for owner H & H Ranch. The 6-year-old son of Early Flyer exits a runner -up finish in the $50,000 Texas Racing Hall of Fame Stakes on November 16 at Retama Park. Junior Chacaltana has the mount and will break from post position seven.

Quiet Acceleration is trainer Danny Pish’s homebred and the 5-year-old has solid turf credentials in his past performances. The dark bay gelding has made 25 starts on the lawn, winning seven races and earnings of $138,103.

Murphy is one of many riders with high regard for Sam Houston’s Connally turf course.

“It’s a blast to ride on the Houston turf course,” admits Murphy. “It’s more plush than most other tracks; horses think they are in heaven, and as a rider, it feels like I am moving on a cloud.”