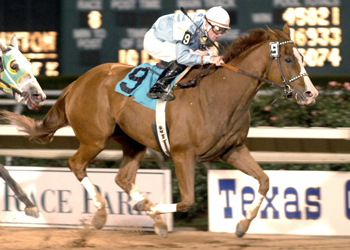 Each year features the usual mix of favorites and longshots and as usual, many memorable moments for loyal supporters of Texas racing.

Houston Texans owner Bob McNair switched playing fields in 2002 and scored a touchdown with his 2-year-old colt Catalissa in the $50,000 Groovy Stakes. Bred in Texas by Stonerside Stable, Catalissa was making just the second start of his career when he stepped up to stakes company.

The stalwart champions have a special place in the history of the event. Michael Stidham had tremendous respect for the venerable Sandburr, who made his 61st career start in defense of his title in the 2007 Star of Texas.

“He’s in a rare class of racehorses,” comments Stidham. “With an older horse you know their quirks and habits. With Sandburr, it’s easy; he tells you when he’s ready to run.”

Lightening Ball, winner of the 1999 Star of Texas Stakes, was retired by his owner Bob Orth of Houston. Orth and his wife, Pat, wanted to make sure that Lightening Ball’s post-racing days were as special as his racing career in which he won nine races and set a track record at Lone Star Park in the 2000 Assault Stakes. Orth approached Lynn Reardon of LoneStar Outreach to Place Ex-Racers (LOPE) and a decision was made to retire Lightening Ball in style on Texas Champions Day. The chestnut gelding remains one of Reardon’s favorite horses.

Texas Champions Weekend always has its share of surprises. In 2009, Crook’s Bodgit came flying at the wire and paid $105.40 to win, producing one of the biggest payouts in Texas Champions Day history.

Of course, who could forget the elation of owner Israel Flores, when Cowboy Cumbia won the 2001 Spirit of Texas Stakes.

“I own both the mother and father so I am very excited,” said Flores. “I have been in this business for 31 years with both Thoroughbred and Quarter Horses. I would rather win this race than the Kentucky Derby. I live here and I am proud of Texas racing.”

Danny Pish has been one of the most prolific Texas trainers and has won 12 Texas Champions stakes, including back-to-back victories in the San Jacinto and Groovy Stakes. His first Texas Champions Stakes win was in 1998 with Royal Image in the $50,000 San Jacinto Stakes. He admits he is hard-pressed to come up with a favorite win as there have been multiple memorable scores.

“It’s hard to say as I had big wins with Boots on Sunday, Leaving on My Mind, Goosey Moose and Alleged Hug,” recalls Pish. “But when Burnin’ Memories won (the San Jacinto in 2003) that was really special. She came off the pace to beat a really nice filly, Eagle Lake. That was a case where we took a gamble in stepping her up and it worked out.”

Pish took time to credit the owners and breeders who have remained in the Lone Star State.

“Even though we are struggling in Texas, we have lots of accomplishments to be proud of,” notes Pish. “Bravo to the owners for hanging in there. Thanks to them, we still have great competition in Texas racing.”

And more memories to be made on January 17 and 18 at Sam Houston Race Park!