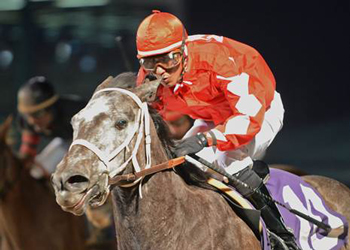 Two defending champions will be in action at Sam Houston Race Park this Friday when live racing returns for the annual Thoroughbred meeting.

Last year, Cowgirl N Up returned to action off a seven-month layoff, and drew off impressively for the win under regular rider Larry Taylor. Owned and trained by Caroline Dodwell, the 5-year-old daughter of My Golden Song has always fared well on Texas Champions Weekend; in 2012, she was victorious in the $50,000 Bara Lass.

She drew the rail and will face her stiffest test from stakes winners Platinum Song and Tastefullyxcessive. Platinum Song captured the 2013 Bara Lass for owner Scott Brown and prepped for the Yellow Rose with a win last month at Fair Grounds. Trainer Danny Pish has given the mount to Roman Chapa.

“She ran hard for 18 months, so we gave her some time off after Lone Star,” said Pish of Platinum Song. “She has matured nicely and ran well in her second start back (Fair Grounds on December 23). That set her up nicely for this stakes.”

Trainer Jack Bruner has entered Forever Since, the winner of the $75,000 Texas Stallion Stakes last month at Retama Park. Owned and bred by Tom Durant, the daughter of Supreme Cat broke her maiden at Zia Park on September 14 and became a stakes winner on December 7 at Retama Park.

Pish has an intriguing filly, Swifterthantaylor, who will make her stakes debut following her eight-length maiden victory one month ago at Retama Park. Larry Taylor has the return call for owner John Silverthorne Ranch Inc. Track announcer Tom Harris should enjoy the play on words of Taylor on Swifterthantaylor during his race call.

Pish is pleased with the jockeys who will ride this meet at Sam Houston Race Park, and will tap the talents of Taylor, Mora, Chapa, Lindey Wade and veteran Deshawn Parker, who is riding in Houston for the first time in his career.

“Larry worked the filly at Retama and fits her well,” said Pish. “There is a lot of depth in the Sam Houston jockey colony this year; a very quality group of riders.

Vilao Seeks Back-to Back Wins in the $50,000 San Jacinto Stakes
Fillies and mares will take to the Connally Turf Course for the mile and one-sixteenth San Jacinto Stakes. Last year Vilao, owned by Rugged Cross Racing, closed with authority under jockey Ramon Luna to draw off to a three-length victory.

It was the first stakes for her trainer, Rebecca Baker, who reports that despite an 11-month, layoff, Vilao is training well for the defense of her title on Friday evening.

“She battled colic last February, so we took her back to Ohio and gave her the summer off,” said Baker. “We were pleased that she put on some weight and looked ready to resume training.”

That took a little longer than Baker expected due to the winter storms which delayed their arrival in Houston. But the 5-year-old mare has made up for lost time and is expected to give a good account of herself in the San Jacinto.

“She loves Sam Houston; broke her maiden here and had a good work Monday from the gate,” added Baker. “I love her draw (post position 7) and expect her to run a big race.”

Veteran Jockey Bobby Walker, Jr. Takes on New Role as Agent
Bobby Walker, Jr. has ridden the Texas and Louisiana circuit for over three decades. He retired several months ago citing a chronic hip injury, which will necessitate hip replacement in the future.

The 53-year-old Louisiana native will remain in the industry as he switches gears to the role of jockey agent for Justin Shepherd and Fabio Arguello.

When he was mulling the idea of becoming an agent, he made a trip to Remington Park to confer with agents Shawn Bergquist and Monty Penny. He also called Scott Hare for input.

“All of those guys represented me at some point of my career,” said Walker. “They gave me their usual amount of grief, but overall, were very helpful!”

Walker was more of a race rider toward the latter part of his career and rarely worked horses in the morning. However, now walking the barns in the early hours is essential to drum up business for his riders.

“It used to be that if I was here at 5:00 am, I was still up from the night before,” admitted Walker with a grin. “Now I am here every morning.”

His riders, Shepherd and Arguello have three mounts each for opening night.

Excitement Building for the $400,000 Houston Ladies Classic
Sam Houston Race Park officials are looking forward to a stellar night of racing on Saturday, January 25. The $400,000 Houston Ladies Classic, the richest Thoroughbred race in Texas will anchor an exceptional card, which will also include three additional stakes: the Grade 3, $200,000 Connally Turf Cup, the $75,000 Champion Energy Services Stakes, and the $50,000 Allen’s Landing Stakes. The marquee racing event will be broadcast on HRTV, “The Network for Horse Sports” and FOX Sports Southwest.

Advance wagering for the January 25 card will be offered on Friday, January 24 and Sam Houston will donate $1 for each patron to benefit the Houston affiliate of the Susan G. Komen®.

Opening Day Promotions
On Friday, the kick off to Texas Champions Weekend, Sam Houston Race Park is celebrating Military Appreciation Night, with Free Admission for Military with Military ID.  It will also be the first of the ongoing promotion, entitled 50 Cent Beer Fridays featuring 50 Cent Draft Beer and $1.50 Wine Specials every Friday from 6 p.m. to 9 p.m.