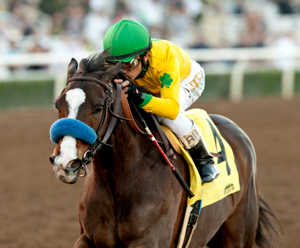 Thegirlinthatsong, a Texas-bred daughter of Texas stallion My Golden Song, scored an impressive victory on Saturday as she defeated millionaire Lexie Lou in the Grade 2, $200,500 La Canada Stakes at Santa Anita Park.

“She’s been training well here and we were looking for a good effort from her,” said Hollendorfer. “I think Rafael wanted to stay back a little more than what I wanted him. I asked him to stay as close as he could and be comfortable, so he did that, and that ended up working out well.”

Bred by the late Clarence Scharbauer Jr. at his Valor Farm near Pilot Point, Texas, which is also the home of My Golden Song, Thegirlinthatsong is out of the Dixieland Band mare Belle of the Band. The dam of Belle of the Band is Alysbelle, a full sister to the great Kentucky Derby and Breeders’ Cup Classic Alysheba who was campaigned by Scharbauer’s wife, Dorothy, and daughter, Pam.

Coincidentally, Thegirlinthatsong won the Got Koko division of the Texas Stallion Stakes last year at Lone Star Park, a race named for the Texas-bred who captured the 2003 edition of the La Canada.