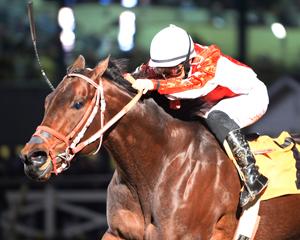 Sam Houston Race Park kicked off its 2015 Thoroughbred racing season on Friday, January 16, with the spotlight on accredited Texas-bred fillies and mares. The Saturday Texas Champions Weekend stakes featured exciting finishes in each of the four stakes for colts and geldings.

F J Uncle Vic Tops Texas Air in the $50,000 Star of Texas
The first stakes of the evening was the one-mile $50,000 Star of Texas. A field of eight, led by Paul Rigali Jr.’s defending champion Texas Air, went smoothly out of the starting gate. Jockey Lindey Wade settled the 7-year-old into contention and had the lead heading into the final furlong but F J Uncle Vic, a 4-year-old son of Key Ranch stallion Uncle Abbie, closed in the final stride to win by a half-length.

Ernesto Valdez-Jiminez piloted the bay colt for owners Johnny B. Evans and Terry Eoff.  Eoff trains F J Uncle Vic, who captured the seven-furlong Allen’s Landing here last year. This was the third win from 19 starts for the Texas-bred and pushed his bankroll to $155,530. He was bred by Mr. and Mrs. Frank Prifitera.

“I am so proud to be here,” said Evans. “I want to dedicate the win to my Uncle Vic, who passed away at an early age. We are so proud of this horse.” 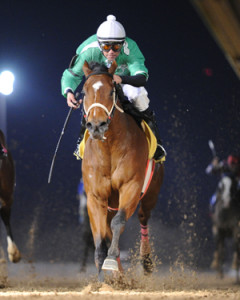 A M Milky Way Earns First Stakes in the $50,000 Groovy Stakes
A competitive field of 3-year-olds, including three entrants from the barn of Bret Calhoun, made their way onto the track for the six-furlong Groovy Stakes.

David L. Davis’ homebred AM Milky Way just broke his maiden on December 14 at Fair Grounds, and he made a confident ascent into stakes company. Jockey Roman Chapa rode the gelded son of Elusive Bluff for trainer Karl Broberg and drew off by a length and one-quarter over Supermason, one of the Calhoun trainees.

Chapa had never ridden the 3-year-old but had a conversation with Broberg prior to the race.

“He told me to ride him like I owned him,” said Chapa. “He got to the lead pretty easily and came home with no problem. There were some nice horses in the race; mine was a tad better.”

A M Milky Way was sent off as the third-betting choice and returned $13.20 for the win. Brad Grady’s Supermason, a gelding by Grasshopper, finished a good second with Donald Sperling’s My Nephew Andrew, by Gaff, in third.

Edplicit Takes the $50,000 Spirit of Texas
Several respected veteran sprinters competed in the six furlong $50,000 Spirit of Texas Stakes. Owner and trainer Patti Turner made her first visit to Sam Houston Race Park with Edplicit, an 8-year-old son of Explicit and veteran of 58 starts. With Alfredo Contreras in the irons, the chestnut gelding defied his age, powering home in 1.11.58.

“He ran an excellent race and beat some very good horses,” said Turner. “We came over here thinking we had a shot. I just want to say that this is our first time running at Sam Houston and we could not have been treated better.”

Wagson, owned by Texas Bucket List Racing LLC and sired by Wagon Limit, ran second under Colby Hernandez, and Carolyn Barnett and Lana and David Alford’s Solar Charge, who won the 2012 edition of the race, rallied for third to push his earnings to more than $450,000.

Last year, Quiet Acceleration, under jockey Roman Chapa, slipped through an opening inside the sixteenth pole to take the Richard King. This year, Chapa took his turf specialist outside of the pacesetters and closed gamely for the repeat. Bred, owned and trained by Danny Pish, the 6-year-old by Silent Picture won his 10th race from 34 starts.

“You never would have thought that both a sire and dam from the claim box could have created a stakes winner,” stated Pish of the earner of $232,617.

Quiet Acceleration ($23.40) covered the mile and one-eighth on a firm turf course in a final time of 1:50.46. Cheyenne Acres’ Fly the Red Eye, by Early Flyer, closed for second under Colby Hernandez followed by William Butler’s Magna Breeze, the post-time favorite.

$400,000 Houston Ladies Classic on Saturday, January 24
Sam Houston Race Park will present another exceptional evening of racing on Saturday, January 24. The $400,000 Houston Ladies Classic, the richest Thoroughbred race in Texas headlines the card, which will also include three additional stakes: the Grade 3, $200,000 Connally Turf Cup, the $75,000 Frontier UtilitiesTurf Sprint, and the $50,000 Allen’s Landing Stakes.  The marquee racing event will be broadcast on HRTV, “The Network for Horse Sports”.

The draw for the four stakes will take place on Monday, January 19 and advance wagering for the card will be offered on Friday, January 23.

The Park will donate $1 for each patron to benefit the Houston affiliate of the Susan G. Komen For the Cure®.  This is the third year that Sam Houston Race Park has joined forces with this highly respected charity.