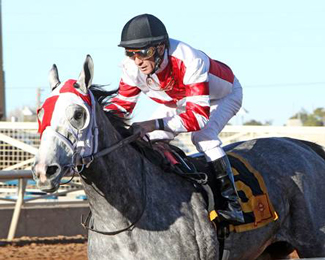 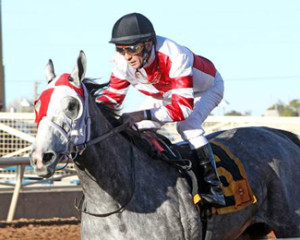 Trainer Larry Jones has special memories of Saturday, January 26, 2013. He shipped in a talented mare for the inaugural $400,000 Houston Ladies Classic at Sam Houston Race Park. Joyful Victory not only won the richest Thoroughbred race in Texas, she set a new track record for the distance of a mile and one-sixteenth.

On Saturday night, Jones returns with two contenders for the third running of the Houston Ladies Classic, Cassatt and Blue Violet. Cassatt will likely get her share of the attention due to back-to-back- stakes wins in her last two starts. She dazzled in the $300,000 Zia Park Oaks on November 26, defeating Thegirlinthatsong by 4 1/2-lengths. The 4-year-old Tapit filly is owned by Fox Hill Farms Inc., who also campaigned Joyful Victory. Regular rider Kerwin Clark will ride and drew the far outside post in the eight-horse field.

Jones has been patient with Cassatt acknowledging that she is a late-developing filly, very similar to Joyful Victory. Following the Zia Oaks victory, she added a second stakes win on December 21, taking the Tiffany Lass at Fair Grounds. Bred in Kentucky by Mt Brilliant Farm, Cassatt’s career record stands at 5 wins from 8 starts, with earnings of $370,233.

“She was very lightly raced early last year and we saw that sprinting was just not her game,” stated Jones. “Just like Joyful Victory, she demonstrated that Tapit excessive energy; she does very well running two turns. She’s maturing and rounding into form.”

Jones’ other mare, Blue Violet, is a graded stakes-placed daughter of Curlin. The 5-year-old is owned and bred by Houston attorney Susan Knoll and will be ridden by Jose Riquelme.

Shanon Nicole, trained by Michael Maker, was the favorite in the Zia Oaks, and Maker hopes she can turn the tables in the Houston Ladies Classic. The 4-year-old Majestic Warrior filly is owned by Connie M. Apostelos of Springboro, Ohio. Apostelos had previous good fortune at Sam Houston Race Park winning the Grade 3, $200,000 Connally Turf Cup in 2012 with Papaw Bodie. Maker has given the mount to Javier Castellano, who was honored last Saturday with his second Eclipse Award at the annual gala saluting the top horses and humans in North American racing.

Shanon Nicole, who drilled a five furlong bullet at Fair Grounds on January 14, will ship to Houston on Friday, according to Maker.

“She should do well at the distance,” noted Maker. “We have had good luck at Sam Houston in the past and this is a very lucrative purse.”

Angelica Zapata shipped from Florida on Sunday by trainer Ron Pelligrini. The 7-year-old mare has earned $572,245 in 31 starts with graded stakes placings in the Grade 2 Sabine Stakes and Grade 3 Marshua’s River Stakes in 2014. Jockey Juan C. Leyva, will pilot the daughter of Sharp Humor. She is owned by Herman Van den Broeck, who bred her in partnership with Buck Pond Farm, Inc.

“She’s a consistent mare and maybe her best quality is her durability,” said Pelligrini.. “We contemplated coming to Houston last year, but stayed at Gulfstream for the (Grade 2) Sabine Stakes. She had some time off and we think this will be a good spot for her.”

Florida based rider Leyva will pilot the Kentucky-bred mare, whose last win was on August 2 in the $90,000 Soaring Softly Stakes at Gulfstream Park West. She drew post position six for her Sam Houston debut.

“Post position will not matter to this horse,” added Pelligrini. “She’s smart and will make her move when she’s ready.”

Defending champion Rose to Gold has already arrived in Houston from her Florida base. Trainer Sal Santoro has done well shipping the daughter of Friends Lake, worked three furlongs in :37.80 at Gulfstream Park on Friday. Winless since her victory here, Rose to Gold prepped for the Houston Ladies Classic in the Miami Shores Handicap on January 7. A top placing on Saturday would vault Rose to Gold over the $1 million mark.

“The effort in the Miami Shores was exactly what we were looking for,” said Santoro. “We weren’t focused on a win; just that she set the proper fractions to set her up for the Houston stakes.”

Sam Houston Race Park will offer a $100,000 Guaranteed All Stakes Pick 4 on Saturday evening. Officials bumped it up from the usual $20,000 Guaranteed Pick 4 due to the magnitude of the rich stakes races. Fans can play the Pick 4 for a $.50 minimum with an industry-low takeout of just 12%.

Advance wagering for the January 24 card will be offered on Friday, January 23.

“The field for this year’s Houston Ladies Classic is outstanding,” said Fred Hutton, Sam Houston Race Park’s racing secretary. “We appreciate the support from horsemen and are pleased to present competitive racing in each of our four stakes.”

Peter Lurie Will Host the HRTV Live Telecast
HRTV, “The Network for Horse Sports” will broadcast a two-hour special beginning at 8:00 pm (CT) from Sam Houston Race Park on January 24th. The special will include live race coverage and special events as part of the stakes-filled card highlighted by the 3nd Annual $400,000 Houston Ladies Classic and the Grade 3, $200,000 John B. Connally Turf Cup.

Peter Lurie, HRTV’s racing analyst, will return to Houston to anchor their live coverage of the evening’s stakes races.

Promotions Lend Excitement to Saturday Evening
For the third year in a row, in honor of the $400,000 Houston Ladies Classic, Sam Houston Race Park has joined forces with the Houston affiliate of the Susan G. Komen For the Cure® and will donate $1 for each patron to benefit the esteemed charity.

“We are thrilled about the opportunity to partner with Sam Houston Race Park and the Houston Ladies Classic Event for the third consecutive year,” said Adriana M. Higgins, Ed.D., Komen Houston Executive Director. “We look forward to everyone coming out to enjoy the races and support Susan G. Komen® Houston in our efforts to provide community funding for breast cancer research, education screening and treatment. Last year we granted over $1.9 million dollars to support local programs and over $900,000 million for research. This year we hope to do even more.”

A new event this year is the La Ve Vee Couture Fashion Show. La Ve Vee Couture will host three fashion shows including appearances by famous Teen Model Sophie Grace. She will be joined by other models in two of the fashion previews in between races on the counter seat stage, located on the second level of the racetrack. Another fashion show will include 8 breast cancer survivors, highlighting these amazing, inspiring women while supporting the mission to bring an end to breast cancer, forever.

Sam Houston Race Park will also offer a Houston Ladies Classic Wine Tasting. For just $20, patrons can get admission to live racing and take part in a special wine tasting on the club level. They will be able to choose six wines to taste from our list of 12, and have the option to buy a glass of your favorite at the end. Each patron will receive a special Sam Houston Race Park tasting glass.