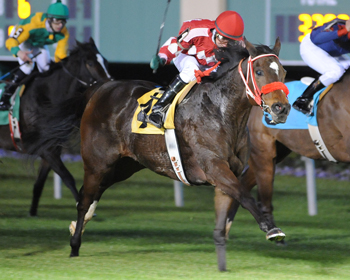 Early Fantasy Prevails in the $50,000 Yellow Rose Stakes
The first stakes of the evening was the $50,000 Yellow Rose Stakes with defending champion Lasting Bubbles taking on five rivals. However, the victory belonged to Early Fantasy, who made a big move at the eighth pole under rider David Cabrera to take the six furlong stakes. The 5-year-old daughter of Valor Farm stallion Early Flyer is owned by Sierra Racing Stable LLC and trained by Andy Konkoly. She was bred by Jim and Marty Evans.

“This filly is like a Cadillac,” said Cabrera. “All I had to do is sit; she relaxed so well for me. I am very grateful to Andy for the mount.”

This was the second Yellow Rose victory for Konkoly, who won the 2000 edition of the race with One to Five and ran second last year with My Golden Belle.

Infectious Pulls the Upset in the $50,000 Bara Lass Stakes
The $50,000 Bara Lass featured 3-year-old fillies at a distance of six furlongs and produced a thrilling finish. Infectious, a Valid Expectations filly bred and owned by W. S. Farish, went from last to first at odds of 11-1.

The dark bay filly is trained by Danny Pish, who won the 2011 Bara Lass with Playgirl Prospect and the 2013 stakes with Platinum Song. She exhibited the same closing kick in her last start on November 15 with a maiden-breaking win at Remington Park and replicated that tonight under rider Roman Chapa.

“Danny told me to get her settled and make one big run,” said Chapa.

Pish gave credit to the impeccable breeding program of Farish and all-time leading Texas stallion Valid Expectations, who was retired from stud duty in 2013.

“She comes from a wonderful family,” stated Pish. “What Valid Expectations has accomplished is incredible.”

Infections crossed the wire in 1.13.32 and returned $24.00 as the second longest shot in the eight-horse field. Douglas Scharbauer’s Santacafe, a filly by Early Flyer who was second in the TTA Sales Futurity at Lone Star, ran second under Chris Rosier, and early pacesetter Tea for Two, a daughter of Valid Expectations owned by Michael Whitelaw and Gerald and Brody Veal, held for third with Benito Morales in the irons.

Expect Royalty Victorious in the $50,000 San Jacinto Stakes
A full field of accomplished turf specialists produced a thrilling final stakes of the evening when they made their way onto the Connally Turf Course in the San Jacinto Stakes.

For the second year in a row, the Fiesta Mile champion from Retama Park captured the mile and one-sixteenth turf feature. Expect Royalty came off the pace in the Fiesta Mile and finished with authority this evening to win her fourth consecutive race.

The 5-year-old mare is another daughter of Valid Expectations, bred, owned and trained by Leroy J. Pollok. Regular rider Iram Diego took full advantage of the early fractions (26.04 for the first quarter-mile and 51.21 for the half) to set her up for a big run at the end. Expect Royalty picked off runners and finished in 1:45.83 over a firm turf course.

“We’ve been blessed with a very nice horse,” said Pollok. “She’s run with the boys on the dirt. It’s hard to put it into words.”

Expect Royalty has now won six of her 11 lifetime starts. She earned $30,000 for tonight’s stakes win and returned $8.60 as the second betting choice.

Rose Mary Chandler’s I am Jane Dough, by My Golden Song, was second under Roman Chapa, followed by Gwen Harrison’s Wampas Kitty, by Captain Countdown, and Vilao, winner of the 2013 San Jacinto.