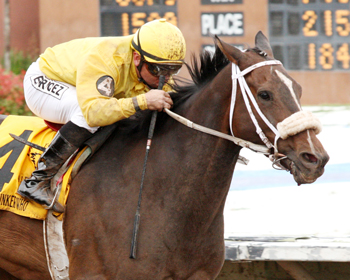 Under a patient and well-timed ride by jockey Isaias Enriquez, Texas-bred Ol Winedrinker Who scored a convincing 4 3/4-length victory in Saturday’s 1 1/8-mile, $150,000 Downs at Albuquerque Handicap.

Ol Winedrinker Who covered his 9-furlong trip in 1:52.64 after closing on the fractions of :22.63, :45.81, and 1:10.75 set by pacesetters Inclined To Win and Rebranded. Joel Marr trains the homebred 6-year-old son of Sligo Bay (IRE) for owners Sam E. Stevens and Sammy L. Stevens of Lamesa, Texas.

Ol Winedrinker Who used similar tactics when he won a 1-mile, $29,300 open-condition allowance race at The Downs on Memorial Day.

“This race set up for us the same way that one did,” said Enriquez, who also rode Ol Winedrinker Who in the prep race. “I figured the pace would be fast for this race, and it was. We were in good position turning for home.”

Ol Winedrinker Who is one of three winners from four starters produced by Silverup, a winning Virginia-bred daughter of the Smarten stallion Prenup. Raced at eight tracks in four different states, Ol Winedrinker Who has won 11 of 33 starts, and the $87,000 winner’s share of The Downs at Albuquerque purse — the richest race of the 39-day spring meet — pushed the gelding’s earnings to $598,603. Ol Winedrinker has been named the Texas Champion Older Horse for the last two years.

Isn’t He Clever, last year’s Downs at Albuquerque Handicap winner and the 7-5 favorite in this year’s race, finished second and was followed by Big Tall Paul, Texas Air, Inclined To Win, Rebranded, and Crimson Night.