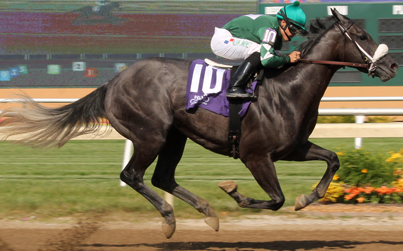 Indiana Grand on June 10 held a pair of stakes for Indiana sired horses with Son of a Nut and Nevertoomanykisses coming out on top.

Son of a Nut just keeps on bringing in the wins. The 3-year-old son of Unbridled Express kept his spotless record intact Wednesday, June 10, winning his third consecutive race and his first stakes in the $85,000 Sagamore Sired Stakes at Indiana Grand Racing & Casino. The lanky grey gelding more than doubled his career bankroll and now possesses more than $91,000 for owner Sherri Greenhill.

Tasked with an outside post in the 12 horse field, Indiana Grand’s leading jockey Albin Jimenez wasted no time getting Son of a Nut in the early action, rolling right for the lead from the start. Son of a Nut, known for his laid back attitude in the barn, had his ears pinned and was all business as he joined Two If By Sea and Malcolm Franklin on the inside and Aye Skipper with Francisco Torres aboard on the outside as the field headed down the backstretch.

Heading into the turn, a small tap from Jimenez gave Son of a Nut the signal to advance, getting a slight edge on the competition before the stretch drive home. At the top of the stretch, he excelled into the lead and although several horses came at him for one final attempt at the lead, Son of a Nut was in full gear, striding out to a seven length advantage at the wire for his third win in as many starts. Lucky Newton and Alex Contreras first tried him on the outside and dipped down along the inside in pursuit of Son of a Nut to finish second followed closely by Aye Skipper, who maintained ground on the outside to finish third.

“He (Son of a Nut) definitely had more energy today than he did in his last race,” said Jimenez. “There’s still more left in the tank. He’s an amazing horse.”

A surprising second choice by fans, Son of a Nut paid $9.20, $5.80 and $3.80 across the board. Jeff Greenhill trains the sophomore standout, who completed the six furlong event in a time of 1:10.06 seconds, a new stakes record in the second running of the Sagamore Stakes.

The next stop for Son of a Nut is still undecided by the Greenhills. He could take on older company in the William Henry Harrison stakes on Thursday, July 16 as part of the Indiana Grand National Racing Festival leading up to the Indiana Derby on Saturday, July 18, or he could stick with straight 3-year-old company and try his luck in the Snack Stakes at one mile on the turf the day before on Wednesday, July 15.

“He (Son of a Nut) is as cool as the other side of the pillow,” said Greenhill. “Right now, I couldn’t tell you. I’ll have to assess the situation, look at the spots and decide later.”

Greenhill has a lot of experience with the family of Son of a Nut. He also trained older siblings Peanut Man, who is now enjoying a second career as a show jumper and In a Jif, who won the $60,000 Holiday Inaugural Stakes at Turfway Park in December 2014. Stallion Unbridled Express stands at Swifty Farms in Seymour, Indiana.

Nevertoomanykisses and jockey Oriana Rossi rallied gate to wire to win the second running of the $85,000 Swifty Sired Fillies Stakes. The duo covered the six furlong distance in a time of 1:10.82, setting a new stakes record.

Starting from the outside post eight in the nine horse field, Nevertoomanykisses moved out of the gate swiftly to get a good spot near the front. Cabby Joshtin and Israel Ocampo held their positioning along the inside while Joyous Lady and Alex Contreras kept up with the early leaders. Heading into the turn, Nevertoomanykisses got by the early leaders and led the field through the turn before being joined by the late closers in the race. In the stretch, Nevertoomanykisses dug in and fended off her top spot as Joyous Lady dipped inside for a challenge and Spooled, ridden by Malcolm Franklin, used a late surge for a big challenge. In the end, Nevertoomanykisses was victorious, winning her third straight win of 2015 by a neck over Spooled and Hay Little Bit, who used a late rally in the stretch to finish third for Jockey Francisco Torres.

Nevertoomanykisses paid $5.40, $3.40 and $2.40 across the board as the bettor’s choice. The three-year-old daughter of Checklist is owned by Deann Baer. She is now four for seven lifetime and adds the Swifty Sired Stakes as her first stakes win to her record. Tim Glyshaw is the trainer of Nevertoomanykisses, who pushed her career bankroll to more than $135,000.

Rossi noted in a post race interview that Nevertoomanykisses broke more alertly than she had in the past, which helped her get into the mix early on. Rossi has ridden the horse in all seven of her lifetime starts.

“Like Oriana (Rossi) said, it was the best she’s ever broke,” said Glyshaw. “You can plan all you want and going in to the race, it looked like there were three or four speed horses. The track is speed biased today, but you don’t want to be ding-donging with those horses, which is what she basically did with one of them and kept going. It just shows how nice she is.”

The next stakes opportunity for Nevertoomanykisses could be the $85,000 Shelby County Stakes going six furlongs set during Indiana Grand National Stakes Festival July 16. The race is part of a four-day series of stakes leading up to the track’s biggest event, the Grade II $500,000-added Indiana Derby set for Saturday, July 18. The other option would be the Ellen’s Lucky Star going one mile on the turf the day before on Wednesday, July 15.

“Well, we tried to run her long last year and it was an absolute disaster,” said Glyshaw. “I think Spooled beat her by 60 lengths. I think we’ll definitely be in the six furlong sired stakes.”