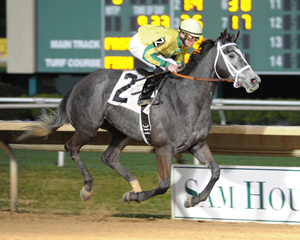 Robert Luttrell’s Promise Me Silver returned to the work tab Sunday morning at Churchill Downs with a half-mile breeze in :49 after the renovation break at 8:30 a.m. ET. This was the Texas-bred daughter of Silver City’s first breeze since finishing 10th as the 7-2 second choice in the June 6 Acorn Stakes (G1) at Belmont Park. It was her first defeat in nine career starts.

Jockey Robby Albarado was in the irons for the 3-year-old filly’s breeze for trainer Bret Calhoun, who was in Texas for the weekend overseeing his string at Lone Star Park.

“She went good and she felt great,” Albarado said following the work.

Albarado was not aboard Promise Me Silver for her most recent start in the Acorn, as he had already committed to riding Shook Up, second in this year’s Longines Kentucky Oaks (G1), who was eased and vanned off the track in that race.

“The last time she ran, they both had awful trips,” Albarado said. “My filly [Shook Up] and she [Promise Me Silver] had a tough trip herself. She stumbled really badly and had to rush up there to the front.”

Calhoun also blamed her most recent effort on the bad trip.

“She broke real bad and had to rush from sixth to first,” Calhoun said via telephone. “I think you can throw that race out. We broke fast way too early.”

Calhoun confirmed that her next start would come in the $150,000 Victory Ride (G3) at Belmont Park on July 4, where she will be shortening back up to 6 ½ furlongs.

“Going back into this upcoming race, we feel very confident,” Albarado said. “I do for sure, after the work this morning it was really nice. She came back good. I think she will stretch out fine, she rates kindly. I’ve sat behind a couple horses with her a couple of times.”