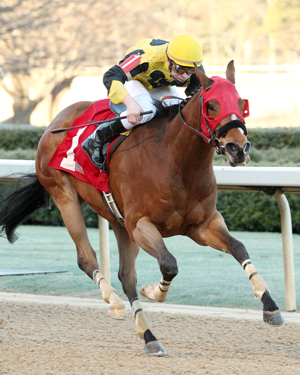 Multiple stakes winner Ivan Fallunovalot, the 2015 Texas Horse of the Year, returned to the work tab Sunday morning at Oaklawn, breezing a half-mile in :48 after the renovation break under Hall of Fame jockey Calvin Borel. The move over a fast track was the first for the Valid Expectations gelding since he developed a quarter-crack on the inside of his left front foot late last month, and first in preparation for the $400,000 Count Fleet Sprint Handicap (G3) April 10 at Oaklawn.

“He looked good,” trainer Tom Howard of Hot Springs said. “I was pleased. I’m trying to get him back on a regular schedule. That doesn’t mean he’ll work every week. He’s eight to 10 days sometimes.”