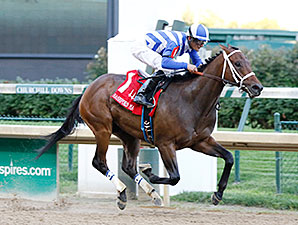 For the third year in a row, a Texas-bred trained by Bret Calhoun and sired by a stallion at Valor Farm won an important 2-year-old stakes at Churchill Downs. On Saturday night under the famed Twin Spires, He’s Comin in Hot drew away to a 3 ¾-length victory in the Grade 3, $100,000 Bashford Manor Stakes for colts and geldings. The bay gelding by Early Flyer stopped the timer at 1:10.90 with Jamie Theriot aboard at odds of 4-5.

“He broke very sharp just like he did last time,” said Calhoun. “He got his feet out under him very well in the first few jumps and was able to clear and not take early pressure. That was my main concern with the one-hole. But I thought he was the kind of horse that could overcome it but you’ve got to have gate speed. He got a comfortable lead. We’ll take a look at the Sanford next (at Saratoga) or race at Prairie Meadows on the 18th of July.”

The Bashford Manor was on the same card as the $100,000 Debutante Stakes for fillies, which in the two previous years had been won by Texas-breds sired by stallions at Valor Farm and trained by Bret Calhoun: Fiftyshadesofgold by My Golden Song in 2013 and Promise Me Silver by Silvery City in 2014.