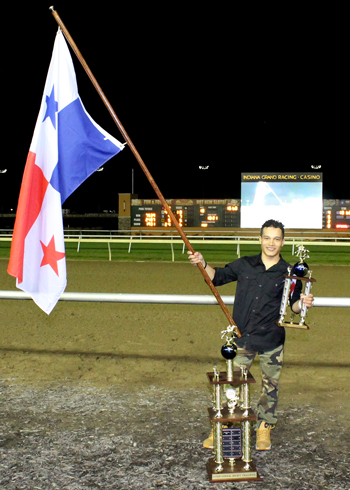 It was an exciting finish that took a five horse photo in the final race to determine the outcome of the second annual World Jockey Challenge at Indiana Grand Saturday, June 27. The combined efforts of jockeys Albin Jimenez and Abel Lezcano paid off as the duo represented their home country, Panama, and won four races on the card to win the title with 48 points over the United States with 47 and Mexico with 43.

There were four lead changes throughout the 10-race card for the top spot in the jockey challenge that included Thoroughbred and Quarter Horse jockeys. Rolando Aragon put Mexico in the lead with a win in the first race before Lezcano grabbed a win in the second race for early contention for the top spot. Then, Team Peru, comprised of Alberto Pusac and Fernando De La Cruz came on the scene with vigor, with Pusac winning the third followed by a win in the fourth race by De La Cruz to take the lead. But Panama bounced back with Lezcano winning the fifth race and Jimenez winning the sixth race to move back into the lead for a second time. Israel Ocampo brought Mexico back into a tie with Panama after the seventh race and Rodney Prescott got the United States closer to the top three teams with a win in the eighth race. Jimenez polished off the final Thoroughbred race with a win, bringing Panama’s final tally to 48 points.

The lone Quarter Horse race on the card was comprised of five jockeys from the United States and four from Mexico. Either team had a scenario where they could have won the entire challenge, but in the end, the win by Smitty Lee Oxendine of the United States paired with a third place finish by Prescott was not enough to overtake the Panama team, finishing one point back in second. Mexico finished close with a total of 43 points for third followed by Peru (28), Venezuela (13), Puerto Rico (8) and Italy (3).

“This was a lot of fun and everyone in the room seemed to have a good time,” said Jimenez, who is Indiana Grand’s current leading rider. “It’s a great feeling to win the challenge and I thank Abel (Lezcano) for helping get the job done. We were in the room and I told him, ‘it’s just me and you, man. We have to work together to win this.’ It was like that with everyone. They were all supporting each other and keeping score during the races.”

Ironically, Lezcano came into the room to ride one horse in the second race, one of two winners on the night for him. Due to rider changes, he ended up riding four on the night.

The team from United States had the most jockeys in the room with nine while Mexico had eight on their team. Venezuela’s Olaf Hernandez was the lone rider representing his country and picked up 13 points on his own in the competition. Orlando Mojica was the same for Puerto Rico, earning eight points for his team. In all, there were nine countries represented in the competition that included 28 jockeys. Points were awarded for the top four finishers in each race, with 10 points for a win, five points for second, three points for third and one point for fourth.

In addition to the World Jockey Challenge, the evening included specialty foods from six different countries at the outdoor food venues along with several beverages from other countries. Also, two Polynesian dancers performed between races, including a routine with fire, which was a crowd pleaser.